I’ve noticed something disturbing as I criss-cross the continent—people seem to have developed a widespread, persistent fear of handrails.
For example, I am in Acadia National Park and we are descending a steep stairway to Thunder Hole, where the ocean crashes into a narrow passageway, spewing high into the air.
Seems like a place where handrails would be a good idea, right?
I observe a young girl reaching for the handrail to steady herself.
“Don’t touch that!” her mother bellows, grabbing her daughter’s arm and yanking it out of danger. 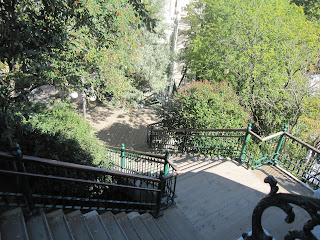 Days later, in Quebec City, we are climbing the long staircase from the Rue du Petit Champlain to Haute Ville—a staircase aptly named Escalier Casse-Cou, or the Breakneck Stairs. Again, a child innocently takes hold of the handrail, and her mother scolds her, whipping out a container of antibacterial foam and smearing it all over her daughter’s hands.
We’ve gone beyond aggressive handwashing and anti-bacterial dispensers on every street corner. These days we’re air-kissing the handrail.
Having been a recent victim of Norovirus, I totally appreciate the dangers in touching contaminated surfaces. But in a risky world, we have to prioritize. I can’t help but wonder if we’ll have an epidemic of people falling to their deaths over cliffs and down staircases and escalators. 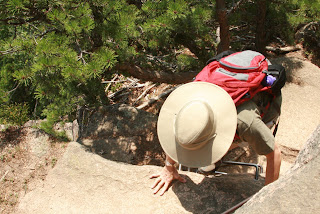 I recently climbed the Beehive in Acadia, clinging for dear life onto those iron handholds bolted into the rock. Believe me, I wasn’t worrying about whether I might develop symptoms tomorrow. I was worried that I wouldn’t see tomorrow.
More important than fear of handrails? Fear of falling.
My opinion—handrails are our friends. With handwashing to follow.
Posted by CindaChima at 11:07 PM

As I was reading your comments about handrails and hand sanitizers, I was wondering how many new germs have mutated so they will be able to live on in spite of being sanitized?
I remember an earlier post of yours about how the weather always seems to be out of the ordinary when you are on vacation. It made me recall the vacation I took several years ago with my family to Acadia. The temp was over 90 degrees when we visited which was unusual, or course. Nothing like climbing mountains when it's so hot the park service closes down it's information center! Did you get to experience temps over 90 degrees in Maine too with it's non-existent air conditioners?

Hi, Linda. Actually, the weather in Maine was very very pleasant! It was the kind of weather that makes you think, I'm going to move here! And then January arrives...