I live in northern Ohio, which for some reason isn't known for its great weather. In fact, we have great weather for, well, most of the year. For instance, today it's sunny and breezy, 75 degrees, and I'm sitting on the side porch drinking iced tea and I can't think of too many places where the weather is better than this. 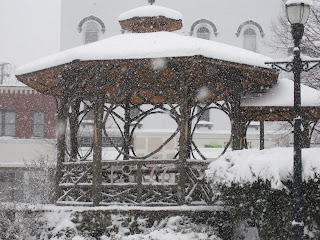 We don't get credit for that.
When friends and family move away to what they consider to be a better climate, they tend to monitor the weather back here. Then, during one of our especially nasty winter storms in January, they call up and say, "Hey! How's the weather there? I hear it's really awful." Even though I don't ask, they say, "It's 80 degrees here, gonna play a little tennis later on. So glad I don't have to go out and shovel! HaHa, loser." Well, maybe they don't say "loser," but that's what I hear.
I've found there's no winning this weather game. Even when the weather is bad there, it's better than here.
When it's 115 degrees there, you say, "It's a dry heat."
When it's 25 below, you say, "At least it's sunny."
When a blizzard blows in out of the Rockies, you say, "It never lasts very long around here." 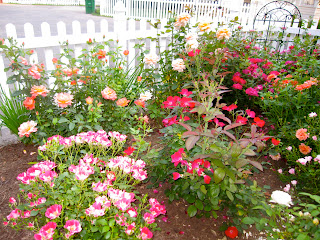 I guess I have some options. In mid summer, I could call up and say, "Hey, I hear your whole state is charred to a crisp! It's really green here, just brought in another armload of flowers. Well, I'll let you go, you better go out and swat some sparks and hose down the outbuildings again." Or during the hurricane, I could call and say, "How's the weather? I heard you were having some trouble. What? I can't hear you, sounds like it's blowing up a storm. Yeah, it's pretty calm here. Still got our siding and everything."
Or I could email a link to this great new tarantula and scorpion repellant I came across. Thought you could use this. Us? Yeah, here we had a bit of an ant problem in the spring. Nothing like YOUR ants, a course.
But I wasn't raised that way.
Posted by CindaChima at 3:15 PM No comments: 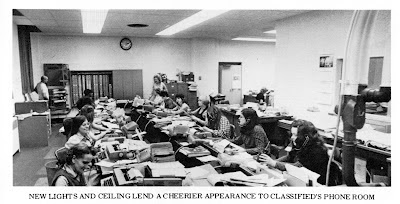 When I was in high school and college, I worked in the classified phone room at the Akron Beacon Journal with a mélange of people. Some were lifers—the full-timers, with contract accounts and a desk name. Miss Allen. Miss Dodge. Miss Jackson. Others were part-timers, usually women on their way to somewhere else. Since we only met customers over the phone, the dress code was flexible for the times.
One of my co-workers was Lucine, a whip-thin girl with quick hands and a brilliant smile. Though she hadn’t much money (none of us did) she always looked fine. Right down to her dry-cleaned jeans.
I couldn’t get over that. “You don’t dry-clean jeans,” I told her.
“Why not?”
“Well. That’s the whole point of jeans.”
“I like the way they look. And that way I don’t have to iron them.”
“Iron? There’s no ironing of jeans!”
In my teens and twenties, jeans were my uniform, my go-to wardrobe item. Something I could wear until they stood up by themselves, then throw into the wash with the hottest possible water.
Each time they would emerge a little bit softer and easier on the eyes. Friendlier to my body. More and more mine. I’d wash them and wear them until they were a second skin; until the hems became frayed from walking on them. Made shabby by love.
It was bad enough when pre-washed jeans came along, all soft colors and manufactured shabby. No longer did you have to put in your time with board-stiff blues to get there.
So recently I got me some of those miracle jeans that are supposed to make you look five pounds thinner and three inches taller. They were comfortable as soon as I put them on, so I went out and double-dug my garden in them. When I went to toss them in the wash, I happened to notice the care tag.
MACHINE WASH COLD DELICATE CYCLE SEPARATELY DO NOT BLEACH HANG DRY USE COOL IRON IF NEEDED FOR BEST RESULTS DRY CLEAN
Never mind the COOL IRON IF NEEDED, since I knew from the start that NO ironing was needed. But DRY CLEAN? DRY CLEAN blue jeans?
What is the world coming to when a person can’t rely on a pair of jeans to survive in the wash?