I often say I'm in the business of transformation. I'm the grand-daughter of a coal miner, the daughter of a truck driver. I've gone from first grade failure to first generation college graduate to dietitian to full-time novelist. But while some things change, others have stayed the same. I've lived in Ohio for nearly all of my life, except for a three-year jaunt in the south. I'm still married to my high school sweetheart. And I like to think that I'm still the girl who went door to door for my candidate the first time I was old enough to vote.
In my book life, Disney Hyperion developed an iconic cover brand that has persisted through two series: The Heir Chronicles and The Seven Realms. When HarperTeen bought my new series, The Shattered Realms, the designers developed a similar brand for the new series, as we were eager to reassure loyal readers that they could look forward to more of what they loved before.

After ten books, it's confusing. When I'm at a bookfest, behind a table stacked with all of the books in my various series, newbie readers look them over and say, Is that all one series? And, Where do I start? Because the books are not always numbered on the covers, readers don't know if a book is the start of a new series or the continuation of an old one. Maybe--just maybe--it was time for a change. 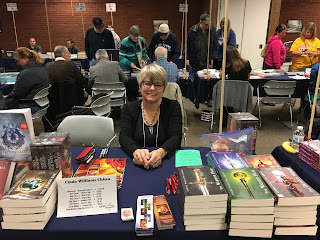 Coming January 4, 2017
A New look for the Shattered Realms!

So the design team at HarperTeen put their heads together and decided to launch a new look for the new Shattered Realms series -- beginning with the paperback Flamecaster and continuing with the hardback Shadowcaster. This time, we decided to showcase some of my kick-ass characters--the ones that go through hell to get from one end of the story to the other.

I've seen the new covers, and they are GORGEOUS!! I can't wait to share them with you. Watch this space and YABooksCentral.com 4 Jan 2017!
Posted by CindaChima at 9:33 PM 1 comment: