I’ve said it before. Author tours are The Agony and the Ecstasy.

Monday night was The Ecstasy.

When language arts teacher Beth Duncan of Vista Academy is on a mission, it is impossible to say no. I had corresponded with Beth several times over the past year and arranged to send ARC’s of The Dragon Heir to her middle school students for their review. When Beth found out I was touring for The Demon King, she emailed me and said, “How can I get you to come to San Diego?” I put her in touch with my publicist, who wisely made it happen.

So Monday I arrived at Vista Academy in Vista, Ca to find that Beth had mobilized the entire school (it seemed) to make me welcome. I presented to the 6th, 7th, and 8th graders. (where's the author?) 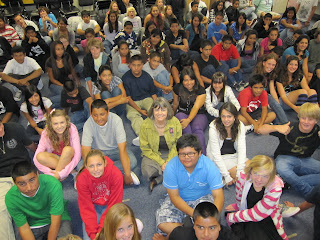 Her videography students filmed an interview. I toured their annual haunted house, which this year was loosely planned around an Heir Series theme, with forests and castles and a dungeon. The students paint all the sets and play scary roles during the haunting. Here I am with Vista students in the dungeon! 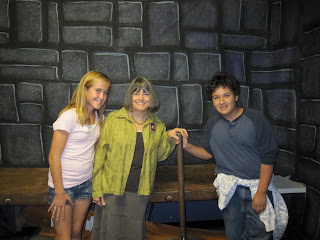 That evening, Beth and her co-conspirator, Lisa Haynes, the Community Relations Manager of the Oceanside Barnes & Noble, had put together an awesome event—an author signing/masquerade/Halloween party. 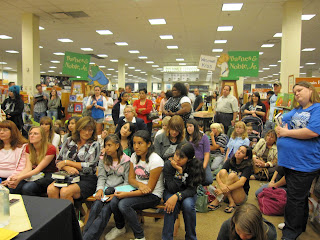 I signed with author Alyson Noel, whose Immortals series is OWNING the bestseller list. (I felt like I was opening for the Rolling Stones.)

Here are me, Beth, and Alyson at the signing table. 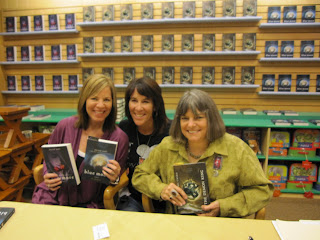 Lisa was dressed as a Clan Matriarch in a gown and feathered headdress. The rest of the staff and many of the attendees dressed up, too. Me? I was dressed as a YA author at the end of a long tour. Thanks to Beth, Lisa, and everyone for making this happen!! 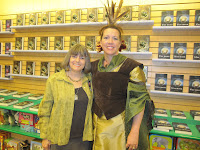 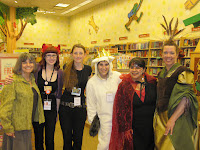 OK, so I’m nearly at the end of my official Demon King author tour, and I’m realizing that all my good intentions of blogging every day, posting photos, etc., and basically immortalizing every fantastic moment were as optimistic as the Official Author itinerary:

2 p.m: Visit six bookstores in the Greater Toronto area, sign stock, return to hotel and relax, have early dinner, and leave for seventh bookstore for evening event at 6:15 pm.

Tips for Other Authors

1.     Never leave for the airport in flip-flops without checking the weather report.

2.     Never approve an itinerary that includes the phrase “check out of hotel at 5 a.m.”

3.     Never wear the same jacket at every event because your spouse will post up event photos on the website and you will be so busted.

4.     Never iron clothing in the hotel room because I don’t want to have to do it.

6.     Plan an answer to the question, “How much do authors make?” Practice keeping a straight face.

This is just so cool, I have to share it. 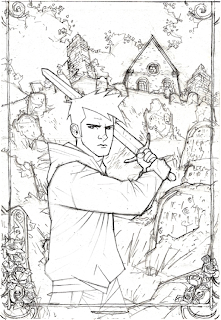 The Warrior Heir was one of the featured books at the 2009 Youngstown State University English Festival. Ursuline High School students John Vitullo and Dan Catello wrote the Shadowslayer Symphony, a composition based on The Warrior Heir. It depicts the events in the graveyard after Jack digs up the sword, Shadowslayer. The symphony won the festival's annual Jeremy Salvner Memorial Music Award. This award is given to junior and senior high school students participating in the English Festival who create the best original music compositions inspired by one or more of the books on the festival's reading list.
Click here to hear their stellar work.
Posted by CindaChima at 3:46 PM 1 comment:

Report from the Wastelands

So I’m in Houston for a series of school visits. But don’t think the title of my piece has anything to do with that: I am having an awesome time—everyone has been gracious and these kids are whipsmart.
I’m staying at a business class hotel. My room is spacious and there’s even a refrigerator I can put things into! All that is good.
But not perfect. They have those Styrofoam cups that I despise, and there’s powdered creamer in the little packets that come with the coffee maker. I am resourceful, though. I bring up some real cream from breakfast and put it in the refrigerator. As for the Styrofoam, I can deal. All part of life on the road.
But I have no wastebaskets. None at all. I search the room twice. You don’t realize how often you use a wastebasket until you don’t have one. Well, I think, surely when Housekeeping makes up the room, they will notice there are no wastebaskets to empty, and they will remedy it. Meanwhile, I strew trash around, which is not the way I was raised.
When I return from the school visit, Housekeeping has been there, they have taken the trash, but there are still no wastebaskets.
Maybe, I think, in their efforts to go green, the hotel has resorted to the “pack in, pack out” policy. Whatever trash you generate, you have to take with you.
I call down to the desk.
“Are you sure?” the desk clerk says.
“Well, yes,” I say. “I’ve looked three times.”
“We have a couple down here,” she says.
“Great,” I say. “I’ll come get them.”
But when I get there, the clerk looks apologetic. “Sorry,” she said. “I thought there were some, wastebaskets here but Housekeeping must have taken them.”
I envision that somewhere there is a hoard of wastebaskets guarded by the Dragon of Housekeeping.
“I’ll tell them to bring you some, though,” the clerk offers.
Some time later, a Housekeeper comes to the door clutching two wastebaskets. “Are you sure? No wastebasket?” She stalks around the room, checking under the desk and in the bathroom, and finally leaves two wastebaskets in my custody. I try to use them a lot after that.
The day isn’t over yet. I go out to dinner with some librarians—we have a great time. When I return, I get on the elevator. I look down and see that someone has apparently defecated on the floor.
I sniff, and there is no apparently about it.
I call down to the desk.
“Um, you may want to alert Housekeeping that there are feces on the floor of the elevator.”
“What?” the clerk says.
“There’s poop in the elevator. On the floor,” I say.
“Are you sure?” the desk clerk says.
“Yes,” I say. “I’m sure.”
“Oh!” the clerk says. “Sorry. I’ll take care of it right away.”
Since then, I’ve huddled up here in my room, afraid to chance the elevator again. And that’s the way it is, out here in the wastelands.
Posted by CindaChima at 10:13 AM 3 comments:

The Author Tour: The Agony and the Ecstasy 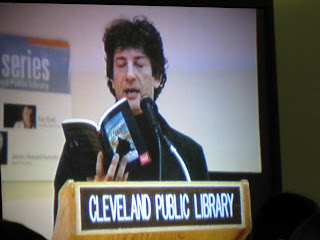 Today I went to see Neil Gaiman speak at the Cleveland Public Library’s Writers and Readers series. We arrived a half hour early, to find the police directing traffic and every seat taken. Latecomers were shuffled to an “overflow room” where we could view the proceedings on a large TV. Mr. Gaiman did stop in to the overflow room before his presentation to visit with us in the cheap seats. He was totally witty and charming. I was sitting on the floor, so I took a photo of the underneath of his chin.

Back in the auditorium, he read from his two most recent books, and then took questions and answers. He told one story of signing a woman’s arm, and she went next door to the tattoo parlor and had it tattooed on permanently.

After the presentation, the book signing line stretched out of the auditorium and out the door. Fans were limited to one item signed apiece: book, poster, or body part.

As my husband and I were leaving, I said, “Well, that was kind of like one of my signings.”

Or maybe a hundred of them put together.

When your first book is released, you have an event in your hometown, and you notify everyone on your contact list—even the spammers and the hair stylist you used to go to before you quit your day job.

Your relatives and friends all turn out, just to see if it’s really true or if it’s just one of those stories you’re always making up.  Some of them even buy your book, so they can leaf through and see if they’re in it.

But the prurient curiosity of friends and relatives will only get you through that first release party.  Believe it or not, they have a limited appetite for literary events. At best, they’ll attend one per book. At worst, they’ll change their email addresses and disconnect their landlines. If you manage to reach them, they say, “Another book? Didn’t you just write one?” “Well, yes, a year ago.”

So you need fresh meat, er, a fresh audience. That’s the time to go on tour.

Every newbie author wants/expects/dreams that her publisher will send her on a national book tour. We imagine ourselves being squired about by limousine and private plane, being met by legions of adoring fans, chatting with Oprah about our difficult childhoods and how we ran over policemen, and otherwise basking in the glare of media attention.

In reality, attendance at author events can be unpredictable at best. Unless, of course, you are Neil Gaiman. If you are Neil Gaiman, you could plan an event at a crossroads in the dead of night and make every effort to keep it a secret and still hundreds would show up, each carrying a copy of Sandman.

I’ve spoken to audiences ranging from the librarian and her sister up to hundreds. The hundreds are usually in schools, which the law says you have to go to. And as long as you’re sitting there, here’s an author.

I did an event in Oberlin when The Warrior Heir was released. The Heirstone series is set in a small town, Trinity, Ohio, which is modeled after Oberlin. As it happened, my weaving guild was meeting in Oberlin that Saturday, so they all came over for the signing. A few other people trickled in, too.

Afterwards, the bookseller said, “Well, that was a good turnout.”

“Why?” I said. “How many usually come for an author event?”

I must admit, I have had some wonderful events, at schools, libraries, book festivals, and bookstores, where some combination of literary karma and the power of determined librarians and booksellers resulted in a wonderful audience of readers. I love meeting readers—even one. I feel so in context.

So.  For the first time, my publisher is sending me on an official book tour beginning next week. You can also find out where I’ll be at my website. I am really excited and nervous and eager to meet you all. Even the librarian’s sister.

Posted by CindaChima at 8:56 PM No comments: