Q: I am always curious what first goes through an author's mind when they begin to write a book.
A: Pure, unadulterated panic!
Q: No, I’m serious! I’m just not sure how to go about it. I have character names, as well as the general plot. I’m just always confused as to how to ‘start’ a book.
A: In two previous posts, I discussed why some writers may begin with great enthusiasm, but lose momentum along the way. They run out of story before they have enough pages to make a book.
But sometimes the problem is getting started. Nothing happens until you put something down on the page. But how?
The cool thing about writing as opposed to, say, building brick walls, is that writing is easy to revise and reshape. Sometimes at first, you can’t really tell where your story begins. My advice: don’t obsess about it. Get something down, and then make your decision in revision. Slash away at the fat at the beginning into you cut into the muscle of the story. That’s the beginning.
For me, books begin with a character, what the character wants, and the obstacles in the way.  For example, in Twilight, Edward and Bella want to be together, but the fact that he is a vampire and wants to kill her from time to time is an obstacle. Then other obstacles surface—Jacob, for instance.
In The Demon King, reformed thief Han Alister wants to earn a living for himself and his family without returning to the gang life. What’s in the way? It’s really hard to make a living in Fellsmarch, because of the ongoing wars, he’s been accused of a series of murders, his mother thinks he’s demon-cursed, and the most powerful wizard family in the Fells is out to get him.
Usually, a book begins with an inciting incident. In The Demon King, Han Alister encounters three young wizards setting fire to his hunting grounds. He takes an amulet from one of them, and that brings a whole load of trouble down on his head.
I think it’s best to begin your story in scene, with characters on the stage, ensnaring us in their story.  The opening of your story should establish voice and point of view, introduce conflict, and make a promise to the reader about the story to come.
It may be helpful to try reading opening scenes in books in your genre. How does the author begin? What does he or she choose to include, right up front?
As I said in my post on plunging vs plotting, you don’t have to have everything figured out in order to begin. Just know that there may be considerable clean-up at the end.
Posted by CindaChima at 10:42 PM 3 comments:

The New England SCBWI Conference or Why Writing is Like Dying

I spent the weekend at the awesome New England SCBWI conference. Mostly fielding reactions like, “You drove ALL the way from OHIO? Don’t they have conferences in Ohio?” (Typical East Coast attitude.)
It was rather rash. You see, eleven hours in the car didn’t sound so bad three months ago, at registration time. It looked kind of misty and romantic, like a far-away, blurry photograph of yourself. I thought, “Road trip! I’ll be driving through the Berkshires in May; how lovely!” And it IS lovely. But still a long way. Even with the Rent soundtrack blasting through the speakers.
I ran into Paula Kay McLaughlin at the luncheon buffet. She lives in Connecticut, but I first met her at the Central Ohio SCBWI conference, where she was busy explaining why she’d driven all the way from Connecticut to Ohio for a conference. “Don’t they have conferences in Connecticut?”
This is Kindling Words East territory, so of course I saw lot of my writing buds from there, including Kathleen Blasi, Sibby Falk, and Toni Buzzeo. Some of us still smell like woodsmoke. Kathleen and Sibby and I celebrated by getting lost in the twisting roads surrounding the Fitchburg Courtyard by Marriott. As Sibby said, “Lock the doors! I think I hear the banjos starting up.”
Here are Carolyn Scoppettone, Libby, and Kathleen in happier times. 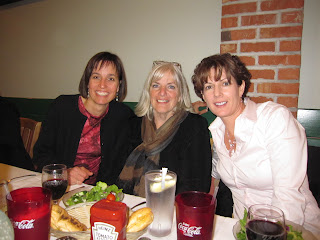 I finally met online friends Jo Knowles and Stacy DeKeyser in person—yay! They were both on faculty for the conference.
Made lots of new friends at dinner Friday night 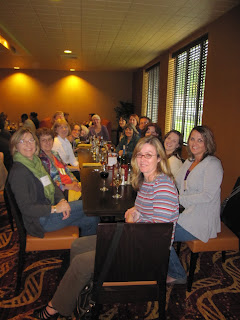 and rubbed shoulders with Cindy Lord at dinner Saturday night. Maybe some of her Newbury-worthiness will rub off on me. 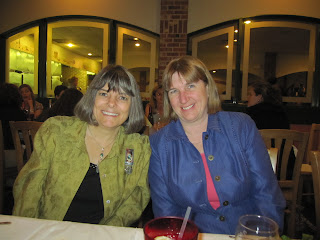 Lest you think I spent my entire time eating, Cynthia Leitich-Smith’s keynote was incredible. That girl has the Native-American equivalent of chutzpah. She told the story of her journey into print. She was living in Chicago and working as a lawyer when an epiphany hit—she wanted to be a children’s writer. At this point she had absolutely nothing on the page. So she and her husband both quit their jobs and moved to Austin. Two years later, Cynthia published her first book.
Cynthia and I put our heads together after her interview on Sunday. Actually, I was hoping some of her chutzpah would rub off on me. 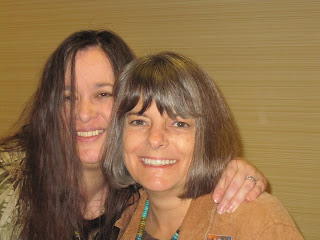 In Liza Ketcham’s Dialogue workshop, we organized into groups of three and wrote a scene together, each contributing a character that was voiced by another group member. Our group ended up crafting a scene involving a wizard, a gossip girl, and an eleven-year-old boy with a disabled brother. I came away convinced that I am unlikely to survive a collaboration.
I also attended the presentation on school visits offered by Cindy Lord and Toni Buzzeo. Cindy had great suggestions for dealing with teens reluctant to share their work. And Toni’s strategies for managing active children in the classroom were golden. Let me tell you, anyone who acts up in Toni’s workshops has no idea what he’s in for. 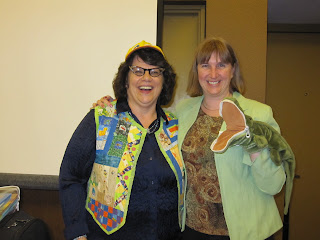 When the conference was over, the hotel emptied out quickly. I stayed overnight so I could leave early in the morning. Still resonating from our comingled spirits, I sat in my hotel room and drank wine and wrote. As my husband would say, something I could easily do at home.
And, maybe it was weariness, or the wine, but it occurred to me that writing is like dying—in the end we are always alone with that page. But our writer and illustrator friends are like a choir of angels, singing us into heaven.
Posted by CindaChima at 10:18 PM 3 comments:

OK, some of you already know this because I just can’t keep a secret, but the paperwork is finally done, and I can officially announce that I’ve just signed a three-book deal with Hyperion, my publisher, for two more Heir books and a fourth Seven Realms novel.
WOO-HOO!!
Now I know that the next thing somebody’s going to ask is what and when and how and who, and the answer is, I don’t know, exactly. I mean, I have an idea. And a contract. I DID write a proposal. Sort of.
This is the kind of planner I am.  I was working on the third book in the Seven Realms TRILOGY. It was due May 1 and I was, oh, on page 576, and my characters showed no signs of wrapping things up and my publisher showed no interest in publishing an eight-hundred page book.
Hmm, I thought.  This could be a problem.
Fortunately, my publisher was interested in more books from me, and so after some negotiation, we made a deal—for one more Seven Realms novel and the two Heir books.
I do plan to finish the Seven Realms series before I write the Heir books, because the story arc goes over all four books and I’m already catching enough heat from readers about having to wait until September to read The Exiled Queen.
Possible titles for the upcoming Heir books include The Sorcerer Heir and The Enchanter Heir, but that’s not graven in stone (I love that word graven. Kind of like craven, but more durable.)
I am scheduled to write a book a year. So that’s what I’ll be up to for the next few years. And my husband is looking at me, saying, Well, maybe could you make a few notes ? So we don’t have to give the money back if you get hit by a truck or something?
And I’m saying, Honey, you know I’m not that kind of a planner.
Posted by CindaChima at 12:06 PM 20 comments:

Near Cleveland or Columbus? Meet me at These Upcoming Events!