Of Moose and Men

I have a poor track record when it comes to seeing wildlife. We always arrive just as the buffalo herd has departed for the high country. Or where the bears chased the hikers into the lake two days ago. Or where the signature species has just declined from threatened to extirpated (a word I learned on my beach walk at Point Wolff, Fundy National Park, yesterday.)
Part of it is, I don’t pay attention. The conventional wisdom is, writers have a keener eye than normal people. Me, I’m focused on the fascinating stories in my head. I wouldn’t survive a minute as a mouse—that hawk would snatch me up while I was making up stories about the doings down by the creek.
Even if my hawkeye husband spots something, it takes me so long to hear and react, the animal opportunity is gone before I can fully participate. Sometimes I claim I saw it anyway, because I am so tired of missing everything. That sort of behavior can get you into trouble if you are married to a trickster.
So we’ve been in moose country for a week now. Everywhere there are signs of moose—and not the kind of “moose sign” rugged, hunky guides talk about on wildlife shows. No, these are official signs along park trails and highways warning of the possibility of moose encounters and offering instructions for what to do when it happens.
We writers are notorious scaredy-cats. We can imagine all sorts of horrific things happening. We do it for a living, after all.
So I study the guidelines, committing them to memory as if it were a surgical manual and I was about to operate on my mother. I develop my plan of action--just like in bear country where I walked the trails, singing campfire songs like a lunatic to warn any nearby bears we were coming. It must have worked, because I saw no bears. Only worried hikers. 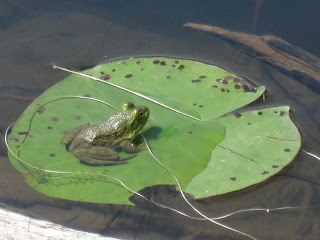 We do see some wildlife. I see a red fox near the border crossing in Maine. I see a frog in Bar Harbor.
I see lots of red squirrels in New Brunswick.As night falls, brown hares are partying along the Matthews Head trail along the Bay of Fundy. We see invasive European green crabs on the Fundy beach and a rat in the Public Garden in Halifax. Canadian black flies feast on my tender Midwestern flesh.
I see no moose.
So I’m in a gift shop in Vermont, sheltering from a downpour, and the subject naturally turns to moose.
“I’ve lived heah more than twenty years,” a customer says. “Never seen a moose in Vermont.”
“Really?” I say, feeling somewhat vindicated.
“The only moose I ever saw were in Ohio. Saw moose twice, over theah.”
I furrow my brow suspiciously. Maybe that’s how the locals have fun with tourists from Ohio. But I haven’t mentioned being from there, and I came in a car with Connecticut license plates.
“Ohio? Moose in Ohio?” I say.
The woman nods. “I’m thinking they likely came over from Pennsylvania. Wild country over theah.”
It figures. I come to the northeast, hunting moose, only to find they’ve just left for Ohio.
Posted by CindaChima at 11:37 PM