The Demon King Releases in the UK February 4 and Australia March 1!

The Demon King is named to the Indie Next Winter 2010 List!

The Demon King is named to the Lone Star Book List 2010!

I’ve been gone a while, so time to catch up on some news. The Demon King is pubbing in the UK from Harper-Collins Voyager with this cover 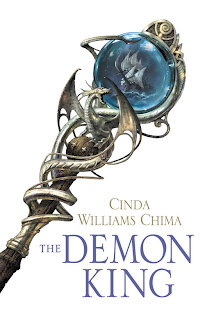 Which is the same art as the Dutch version.

This is my second book to make the Lone Star list (The Warrior Heir was on it) and my first book to be named to the Indie Next list. Here’s a shout out and thank you to independent booksellers and librarians in Texas! 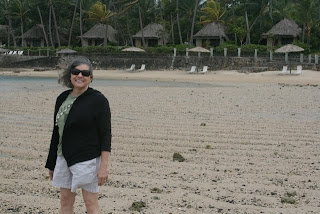 OK, so I went to Fiji, and it was frickin’ freezing It wouldn’t be so bad except that my expectations were so very different. We planned to launch our journey to Australia and New Zealand with two days baking in the Fijian sun, recovering from jet lag. Instead, we departed the airport in a fine rain that continued all day, off and on. Gamely, I plastered on sunscreen and headed out to the beach in my shorts and tee shirt. Gale force winds blew in from the sea, sending surf crashing up over the reef a short distance out. Gray clouds boiled over the horizon as resort staffers nailed up storm shutters. Before long, I had layered on a hoodie and eventually gave up and put on long pants again. It was more Lake Superior than the South Pacific.
Apparently the sun shines here sometimes. I have travel brochures to prove it.
Mind, this is nothing new for me. I’m used to traveling places and having people say, “Sheesh! This is unusual. I’ve never seen it snow this time of year!” Or, “Thank God the drought has broken.” I once went tent camping in the Painted Desert—a places that gets only 7 inches of rain a year. Two inches came down the night we camped—causing a massive hatching of Mormon crickets. As they scratched against the tent, trying to get in, I was sure we were being invaded by an army of half-drowned scorpions.
Looking for unusual weather? Tired of the same old same old? Invite me to come visit.
Posted by CindaChima at 10:16 AM 2 comments:

Our hotel at Yulara Resort in outback Australia is beautiful—definitely a three-wastebasket facility. But I noticed an interesting information card in the bathroom. It was titled “Uninvited Guests.”
You may notice one or two uninvited guests. Please do not be alarmed, they are native to the area and it is quite normal for them to appear throughout the resort. If, however, you are disturbed by their presence, please contact reception.

It was unusually circumspect, like they didn’t want to frighten you by actually naming some of the uninvited guests you might encounter. However, its lack of specificity invited worrisome speculation as to what kinds of uninvited guests to expect. Sneak thieves? Freeloading relatives? Late night partiers?

Or maybe they meant intruders from the natural world. Dingoes or wallabies? Rose-breasted cockatoos, who flew in colorful and gossipy flocks from tree to tree, but which our tour guide described as pests. Cockroaches or cane toads? Deadly poisonous snakes or scorpions or spiders (we are in the Australian desert, after all.) Maybe the notice referred to the little clouds of flies we take with us everywhere? 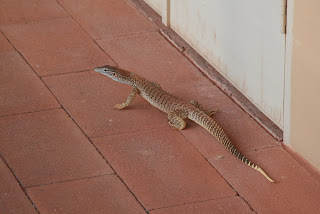 Or possibly they meant the three-foot long goanna lizard I encountered in the laundry room.

We get an introduction to all things sheep at the Agrodrome, an agricultural demonstration show in Rotorua. 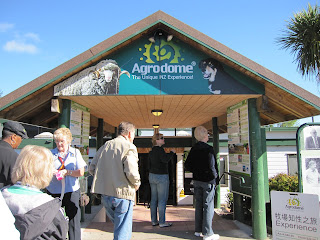 A mulleted host in a wifebeater comes out on stage, telling jokes as his comely assistant leads out nineteen different breeds of sheep, from Merinos to Lincolns to Romneys. I remember some of the names from my spinning and weaving days.
A sheep shearing demonstration follows. A wary ewe emerges from a doorway on stage right. After a few moments struggle, the host deftly flips her onto her back, where she sits, legs dangling foolishly in front of her. Perhaps closing her eyes and thinking of England, she allows the shearer to have his way with her. In less time than it takes me to get a haircut, the fleece is razored off and the sheep looks about half its original size. 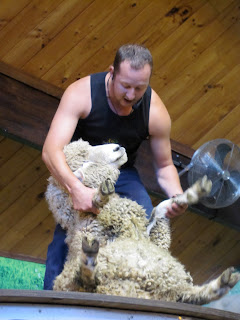 When he asks for volunteers for milking, I impulsively raise my hand and join the other two victims on the stage. After all, I’m scheduled for a farmstay the next day, and I might need me some skills. Last time I volunteered and was called up on stage, it was for a wine-tasting. And that worked out all right.
Happily, we are milking a cow instead of a sheep. Somewhere, I’ve read tips for successful milking. Or maybe it was those lactation pamphlets I read after my sons were born.
This cow’s udder has been liberally greased up with some unknown farm substance. I don’t know if this is intended to make it harder or easier. Trying to remember the particulars, I grasp the udder firmly at the top and strip my hand downward, using my best empty toothpaste tube technique. Success! A thin stream of blueish milk splashes into the pail. The host looks mildly surprised and a little disappointed. I receive a certificate of “udderance.”
There follows sheepdog demonstrations in which one of the dogs herds several ducks back and forth across the stage and other dogs race across the backs of the mildly interested sheep in a technique called, understandably, backing. It’s kind of like a sheep mosh pit. It’s unclear whether this has any practical purpose but it makes for interesting and difficult to interpret photos. 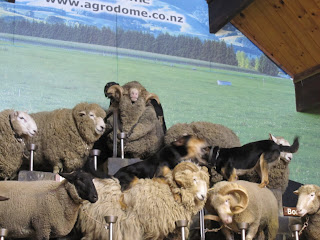 I am convinced that nobody loves his work like a sheepdog. If they were any more alert and eager they would explode. They ought to show videos of sheepdogs at employee meetings instead of hiring motivational speakers.
The show closes with a mock fleece auction in which a reluctant Korean woman ends up owning an armload of unwashed wool redolent of lanolin. Then everyone repairs outside for a sheepdog demonstration with actual sheep.
All in all, I had a great time, but I think I have more of a future in wine-tasting.
Posted by CindaChima at 7:47 AM No comments:

In the Land of Second Breakfasts

Having just come off a ten-day book tour in the U.S. and Canada, I’ve learned that the wise traveler seizes any opportunity to eat, no matter how marginal the provender. When food is on offer, we furtively stuff our pockets, too, preparing against a lean future. Flying U.S. airlines these days is like visiting those inhospitable relatives who, even if you appear at mealtime, have always just eaten or make it clear they have no intention of breaking out the food and drink until you leave.
So it’s quite the shock to be traveling in the South Pacific and discovering that, around here, airline meals is one corner that’s not yet cut. Or maybe places are just so far apart they have to bring provisions.
Remember that scene in Fellowship of the Ring when hobbits Merri and Pippin are traveling with Aragorn the Ranger and realize that mealtimes are going to be few and far between. “What about second breakfast?” Pippin says plaintively. “Elevenses? High tea?”
We’ve had a spate of second breakfasts. Following experience, we eat before we get on the plane. And then they feed us on the plane. Or we eat on the plane, and then they feed us at the hotel on arrival.
The breakfasts on Air Pacific have been hearty but peculiar. Both have consisted of lamb sausage, omelet, corn, hash brown potatoes, fruit cup, and juice.
What’s the deal with the corn? My ingrained nutrition training and Yank sensibiities say, no way there should be hash browns and corn at breakfast. No corn at all unless it’s grits or muffins. I try to tie it to British heritage, but corn is a New World vegetable.
There’s also a dearth of sugar free and diet foods. Perhaps people around here move around more than we do in the States. And the diet soda vends under different names. At our hotel, Pepsi Light and Pepsi Max were both on offer. I had to read the label carefully to determine that they were both sugar-free.
On the upside, the yogurt tastes much more like yogurt than what I’ve been getting at home. More like milk and less like carageenan. And I’m loving the exotic fruit—papaya and mango each morning at breakfast.
And they have this delicious rich ice cream in New Zealand called hokey-pokey. It tastes like homemade.
Note to self: move around more.
Posted by CindaChima at 5:04 AM 2 comments:

Hanging with the Presidents

If you want to go to Australia, you pretty much have to go through LA. So we flew into Los Angeles this morning, arriving about 10:30 a.m. Unfortunately, our plane to Fiji didn’t leave until 11:30 p.m. (2:30 a.m. by my home town clock).  Fortunately, our travel agent gave us passes to the Continental President’s Club.

I’d always gazed longingly at those fancy wood-paneled doors, wondering what delights lay within. So I was practically giddy with anticipation as we pressed the little doorbell and were admitted.
OK, I’m a writer—my imagination always surpasses reality. But it was still very nice—much better than huddling in a cracked vinyl chair in the boarding area or wandering the concourses, looking for a place to plug in my power-depleted laptop.  There were work carrels with power outlets, lights, and telephones. There was wireless Internet access throughout the club. There were comfortable chair groupings with more power outlets. There was a pantry area with tea, coffee, water, and snacks including crackers and cheese and fruit.

Did I mention there were power outlets?

I did a last quick-edit of The Exiled Queen before sending it off to my editor using the handy wireless access. My husband updated my website with photos from the Demon King tour. I looked around at the other patrons, wondering if they were really presidents or if they’d got in on a pass like us.

I couldn’t help thinking that it would be nice if such a lounge was made available to airline passengers if, say, their flights were cancelled or delayed through no fault of their own. Recalling my night spent sleeping on a baggage cart in Laguardia Airport (it was raining), and my night spent sleeping under a chair in Heathrow Airport (air traffic controllers strike) it would have been much more pleasant to have spent them hanging with the Presidents.

My husband and I took photos of each other sitting in the President’s Club, because who knew if we would ever get there again.