What Does the Warrior Heir Have To Do With Standardized Testing?

Nothing. And that's just fine. 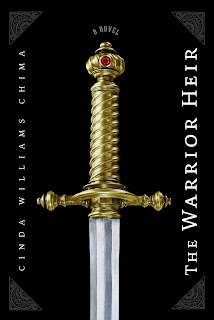 In January, while her classmates tapped in answers on the computerized Measuring Academic Progress test, Daisy read The Warrior Heir, a fantasy novel. "My classmates were, like, 'Man, I'm so jealous.'"
Read more on The Chicago Reader.
Posted by CindaChima at 8:32 AM No comments: 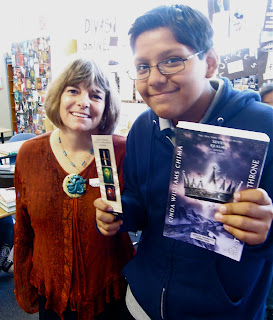 I tend to gravitate to jobs that anyone can do. I used to be a dietitian. Everyone’s a nutrition expert—from your sister-in-law who just lost fifty pounds to the celebrity with a diet book to sell to the hardbodies at the gym pushing the latest supplement to the huckster who hangs up a shingle and calls himself a “nutritionist.”
I’ve been a teacher, too, and how hard could that be? I mean, if you can’t do, teach.
This doesn’t happen to my husband, the rocket scientist. He actually   complains about that. “People ask me what I do, and I say, ‘computational fluid dynamics’ and the conversation shuts down.’”
Nobody ever says, “Oh, I always wanted to try aerospace engineering,” or “I’m thinking about taking that up when I retire” or, “My career in lingerie sales didn’t work out, so I think I’ll focus on CFD.” People acknowledge that it takes a little prep to do that job.
Now I’m a novelist, and everyone has either already done it or they’re just about to or they could if they wanted to.
I did a gig at a public library recently. It was a mixed crowd—teens and adults, writers and readers, current fans and potential new ones. Like usual, I talked about my books, my writer’s journey, and the writing and publishing process.
During the Q&A, one young lady in particular asked numerous questions about writing and the business of publishing. It was clear she was new to the game, but she’d come prepared to learn and I was impressed with the research she’d done. I tried to share what wisdom I had.
The biggest mistake we all make, I said, is to rush to submit a manuscript before it’s ready. Sometimes it’s hard to know what you don’t know. Trying to sell a half-birthed book is like trying to roll a boulder up a hill. Focus on craft first.
I noticed a gentleman sitting behind her who didn’t fit into my usual demographic. He sat, arms folded, scowling, like he’d come for a tax prep seminar and had stumbled into a Baha’i meeting. Clearly, I was not meeting his expectations. But he asked no questions.
Maybe, I thought, he’s just somebody’s ride.
He was, however, first in line at the book-signing after. But not to get a book signed.
“I may be in the wrong place,” he said. “I’m a medical doctor. I’m writing a book. I need an editor or agent to send it to.”
Let’s turn this around, shall we? Suppose I went up to him at a medical seminar and said, “I’m a New York Times bestselling novelist, and I’ve taken up  brain surgery. Can you get me privileges at your hospital?”
See, I’m not bluffed by someone who plays the “doctor” card. When I was in  health care, I worked with some physicians who were brilliant, skilled, compassionate human beings. And others who were not. Doctor worship is so last century.
But I also knew many doctors and lawyers had successfully made the shift to writing. I am the poster child for transformation. So I gave him the benefit of the doubt.
After a quick look-over to make sure he wasn’t packing (a manuscript, not a gun) I said, “You know, there’s a lot of information on my website for writers, including how to go about finding an agent.” I tried to hand him a bookmark. “My website is on the back of this.”
He drew back, spurning my bookmark. “Who’s your agent?” he asked, pen and notebook at the ready.
“Are you writing fiction?” I asked. “Is it a novel?”
“Not really,” he said. “But it could be. It has medical things in it.”
Ohhh-kay, then. By now, I knew all I needed to know. “My agent’s contact information is on my website, too,” I said, looking pointedly at the long line of people behind him, thinking, Do you know how to use the Internet? Did you hear a word I said?
“What about his phone number?” he persisted.
“Oh, no,” I said, imagining that conversation. “Trust me, you don’t want to do that. Best to email him.”
And, finally, Mr. Medical Doctor departed.
And I thought, is this how you went about entering the medical profession? Did you call up a random doctor and ask for a job referral? All the while making it abundantly clear that you hadn’t bothered to learn anything at all about the field?
Oh? I need a license to practice medicine? I thought since I was just practicing….
No, you don’t need a license to write. Whether you succeed or not is all about the work. Well, mostly about the work. In that way, it’s the most democratic field around. That said, it’s hard. It’s a skill, like surgery, that requires training and practice. And, like surgery, you’re unlikely to succeed if you don’t put that time in. At least the people who pretend to be doctors spend a little time on Wikipedia, brushing up on the right words to use.
When entering a new profession, it’s important to humble yourself enough to acknowledge that you’re a newbie. When I began writing novels, I was a kick-ass  dietitian. But I was no way near a novelist. I knew that I had dues to pay and a lot to learn.
I’m a natural teacher. I’m here to help. What I require of my students is that they meet me half way.

Meet Me at the Tucson Festival of Books! 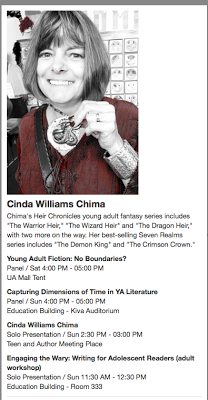 Looking forward to hanging out with readers and writers at the Tucson Festival of Books! I'll be there for panels, writing workshops and signings both Saturday and Sunday, March 9 and 10th at the University of Arizona Tucson.
Other teen authors include Maggie Stiefvater, Heather Brewer, Gayle Foreman, Margaret Peterson Haddix, A.S. King, Tamara Ireland Stone, and many others.
Want to know who'll be there? Go here. For general information about the fest, go here.
Posted by CindaChima at 10:38 AM No comments: