We visited with my husband’s cousin in Connecticut, the first time in many years. I love New England, although I suspect it is way too blueblood for me. Everywhere I look there is eye candy—clapboard houses with attached barns, white Congregational churches, dry stone walls, crinkled woodlands too rocky to keep under the plow. And, like a special gift, glimpses of the Connecticut River through the trees. 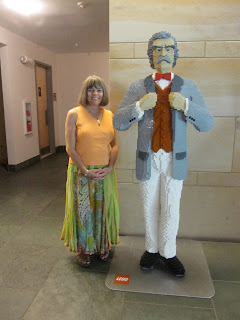 We visited the Mark Twain House in Hartford, Conn. I’ve been a fan of Twain’s for years, because he always said what people were really thinking, and said it so disarmingly, and with such humor, that he could get away with it. Also, we was a southerner who was anti-slavery at a time when that was unpopular.
Also, he saved my life in high school when I had to do an oral book report on The Last of the Mohicans. I discovered Twain’s hilarious critique of James Fennimore Cooper. I used excerpts in my speech, which made me look so witty and clever on the lonely auditorium stage that they asked me to join the Debate Club. I declined, but, still—it was nice to be asked.
The museum guide told the story of how the lowborn Clemens courted his wealthy  bride, Olivia Langdon. When her father turned him out of their house, he slipped on the walk and had to be carried back into the house to recover from his injuries. It took two weeks—and in that time he won Livie’s father over. 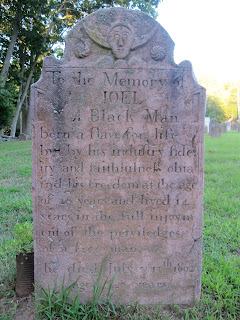 Back in East Haddam, we walked through the Riverside Cemetery (formerly the Landing Burial Yard) behind St. Stephen’s Episcopal Church. I have an affinity for graveyards—old ones, not new ones, which tend to be cloyingly sentimental. The best graveyards are in New England—full of death’s heads and dire warnings to the living souls left behind.
As we walked, we read the stones. One was dedicated to the memory of “Joel, a Black Man, born a slave for life, but who through industry, fidelity and faithfulness obtained his freedom at the age of 26 years and lived 14 years in the full enjoyment of the priviledges of a free man. He died July 10th, 1802 at the age of 40 years.” Twenty-six years of service for fourteen of freedom—not a bargain.
Another stone tells the sad story of one Amata Brainard, a ten-year-old boy who was killed one Sunday in 1799 by the falling counterweight of the church bell as he was walking into church.  Ah, irony. There is, indeed, danger everywhere. At the least he could have been walking out, freshly churched, when it happened.
But would a ten-year-old boy have wanted to spend his last moments in church?
Another stone eulogized poor Patrick McCormick, who drowned.
I think families should be required to put how their relatives died on their  gravestones. It would make modern graveyards much more interesting. 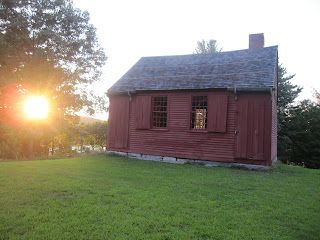 Behind Riverside Cemetery, high above the Connecticut River, stands the schoolhouse where patriot Nathan Hale briefly taught. Apparently he found the backwater town of East Haddam too slow-paced after his years at Yale University. He left after one term on his way to martyrdom at the hands of the British.
Posted by CindaChima at 10:32 PM