Back In the Hills

We spent last weekend in Asheville, NC. When we invited my son and his girlfriend to come along, Eric said he’d heard that Asheville was a hangout for  hippies. I said, great, I still have a few tie-dyed and fringed items stashed away somewhere.
These days tie-dye is made in China and shipped around the world. Except, maybe in Asheville. Like Boulder, Colorado, Asheville is an anachronism, an eddy in time where children of the 60s and 70s might feel at home. Except they’d wonder about the cell phones. And the iPad we saw in a coffee shop.
Asheville has good intentions—there are green remodeling companies and a food co-op, dog-friendly stores and restaurants, and signs in all the store windows downtown—Thank you for buying local.
There’s money in Asheville—the woman in the yarn store said people move there from San Francisco and New York City and build mansions and castles in the mountains. But it’s still laid back and frayed around the edges enough to suit me. Even if some of the fraying is factory-applied, like the jeans you buy already faded.
It is an odd mingling of commune and company town. When George Vanderbilt chose the area for his “country estate,” it was just a little crossroads. He put up the largest private home in America, then constructed Biltmore Village, with houses, a hotel, a church, and a hospital, so when his friends got off at the train station they wouldn’t be in the middle of nowhere. The Vanderbilt descendants still own the house and are the number two employers in the area. They are also major real estate developers. Everyone we talked to had only good things to say about the family. 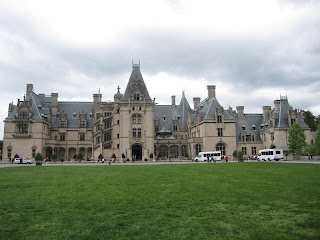 We stayed in a condominium in the former hospital in Biltmore Village. With its rollerskate-worthy hallways and oversized public spaces, we felt like guests in somebody’s mansion.
While we were in Asheville, the town was abuzz because President Obama and his wife were visiting for the weekend and staying at the Grove Park Inn. Everywhere we went we heard reports of Obama sightings.
We walked into Malaprops Bookstore, and found a small shrine of Obama-related books near the front door. Likely, they’d heard about his visit to indie Prairie Lights Bookstore in Iowa City, where he bought books for his daughters. 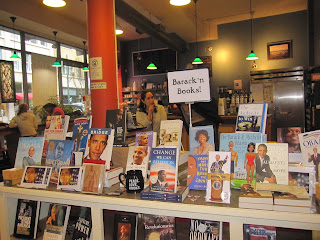 “Word travels fast,” I said to the clerks in a clothing store on All Souls Crescent.
“Cell phones, you know,” they said.
They were right. Asheville may be the biggest town in western North Carolina, but it’s still somehow a small town. Me, I’m always too much in a hurry. I forced myself to slow down and visit and listen.
We tried to get into the Corner Kitchen Restaurant for dinner Saturday night, but there was too long a wait and we had to make an 8 o’clock curtain for Rent at the Diana Wortham Theater. So we made brunch reservations for Sunday.
We found out later that President and Mrs. Obama ate dinner there Saturday night after enjoying a private tour of the Biltmore House. On Sunday, we heard he was meeting with native son Billy Graham.
“I don’t know why he wants to do that,” the clerk in a gallery in Biltmore Village said. “I haven’t forgiven Billy Graham for the Nixon tapes.”
Huh? I thought, but kept quiet.
“You know, out there at the Billy Graham Library, Billy’s son Franklin put in those awful talking cows,” she went on.
“Talking cows?”
“They’re the tour guides. Talking mechanical cows, can you believe it? If Ruth were still alive, she’d want nothing to do with that. As it is, she’s probably rolling in her grave. But they spent too much money on them, so they had to use them.”
“Ah,” I said. 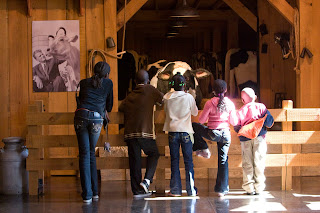 We drove to Chimney Rock State Park, which is a lovely hairpin curve kind of drive along the Rocky Broad River. We couldn’t take the elevator up to the top of the chimney, because we had a dog along. So we walked up, through groves of blooming mountain laurel. From the top, we saw hawks soaring below us, over quilted green tree-tops in spring colors, Lake Lure in the distance. We walked down to Hickory Nut Falls (gorgeous). And then back up to the parking lot, leaving my legs rubbery and tingling and my senses satiated. 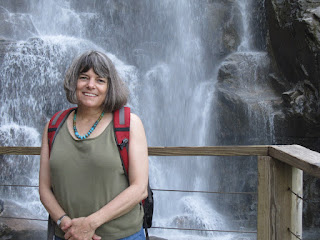 There’s something about the mountains that soothes my soul and inspires the writer within. The mountains are full of stories—cautionary tales about romancing the wrong person and strangers at the door. The music is homegrown poetry, stories set to music, classic tales of love and loss, gambling and murder and the imperfect people I fit in with so well. Some people pay for their crimes (Tom Dooley, Geordie, Omie Wise) and others get away with them (Pretty Polly, That’s What You Get for Loving Me.)  That’s the way of the world.
I think a love of the hills is hardwired in me—my ancestors came from hilly places, some of them from North Carolina. I feel cradled by crinkled land, sheltered in the smoky shadows of the worn-down peaks of the Appalachians. Even though I’ve never lived there myself, it’s home. 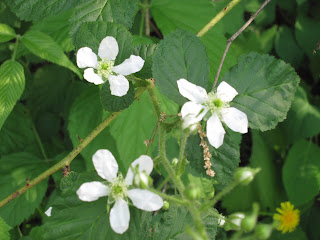 Chima's Rules for the Writing Life

OK, in my last post I shared Ten Rules of Fiction Writing related to craft. Today I’ll post my rules for The Writing Life.

ON THE WRITING LIFE
1. Don’t be a writer unless you absolutely have to. To paraphrase Red Smith: Writing is easy; all you have to do is sit down at the keyboard and open a vein.
2. Nothing really happens until you put your butt in the chair and get the words down. If everyone who wanted to write a book actually did, the earth would be denuded of trees.
3. Never read your work once it’s published. There will always be something you wish you’d done differently.
4. Three hours on the Internet can save you a good ten minutes in the library.
5. If you cannot make a living through writing alone, find a day job that will not suck the marrow out of you.
6. Figure out when your best writing time is, and spend it writing, not Googling yourself, watching Cash Cab or researching agents.
7. There are too many arbitrary divisions in fiction—between young adult and adult lit, and between the genres and so-called “literary fiction.” All good writing has more in common than you think.
8. Never judge a genre by its worst example.
9. Don’t believe your best reviews—or your worst reviews.
10. Not everybody is going to like what you write. It doesn’t matter how good it is.

There you go. When it comes to sex and similes, you’re on your own.
Posted by CindaChima at 1:32 PM 4 comments:

Recently the Guardian newspaper asked established novelists to share their Ten Rules of Writing Fiction. Twenty-eight authors responded with guidance on everything from adverbs (a mortal sin) to sex (abstain from sex and similes) to travel (Margaret Atwood suggests that you take a pencil to write on “aeroplanes,” since pens leak.)  Philip Pullman rather snippily said that his main rule is to say no to requests that take him away from his proper work.
And I got to thinking: I teach a lot of writing workshops, and I correspond with many young and newbie writers. Wouldn’t it be efficient to be able to sum up all of my wisdom in a few key rules? Is it even possible? Could I tell you all you need to know about writing in ten Tweets?
OK, I’m a fantasy writer. Ten rules is so not enough. With ten rules, I’m just clearing my throat.
Let’s begin with craft, and I’ll follow on tomorrow with ten rules for The Writing Life.
ON CRAFT
1.     If you get your characters right, they’ll write the book for you while you cheer them on.
2.     The most important thing to know about your characters is what they want, and what’s in the way.
3.     Be kind to yourself when you are writing a first draft. It’s a scary business.
4.     It’s always best to write a first draft when the editor in your head is asleep.
5.     When it’s time for revision, shake her awake and give her a strong cup of coffee.
6.     If you want to be a writer, you’d better learn to love revision.
7.     You can learn a lot about writing novels from the movies. In a movie, story is delivered in scene, through action and dialogue. There’s no author getting in the way, explaining what needs no explanation.
8.      Trust your readers and give them room. Readers and writers are partners in story—both contribute to the final work.
9.     In real life, we get to know people through what they do and say. Allow your readers to get to know your characters in the same way.
10. It’s not about the idea. It’s about the execution. Really, it is.
Posted by CindaChima at 7:12 PM 3 comments: 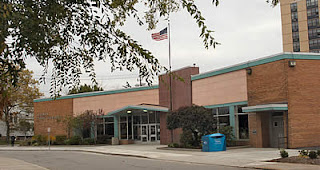 This free one-hour program is sponsored by Lorain Public Library System in celebration of National Library Week. Preregistration is required by calling the Main Library at 440-244-1192 or 1-800-322-READ, ext. 246.

And shout out to Children’s Book World and Friends’ Central School near Philadelphia, PA 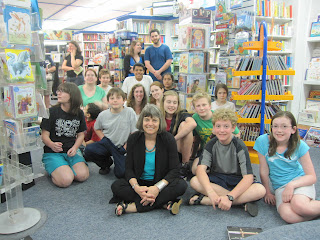 Thanks to Sarah, Heather, Janet, Hannah, and all of the Children’s Book World Staff for an awesome visit!
And thanks to Teri and Penny and all the students at Friends’ Central School for hosting me so graciously there! 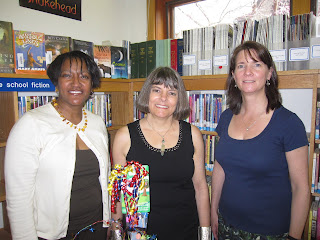 You all rock!
Posted by CindaChima at 12:16 PM No comments: