Greta stopped speaking to me.
Was it something I said? Did she disapprove of my infrequent trips to the mall? Was I spending too much time in parking garages, while she searched for me in vain? Was I spending too much time with Google Maps?
Did I ignore her once too often?
I’ve blogged before about my love affair with my GPS, Greta Garmin. It’s easy to develop a relationship with any machine that talks to you.
Whenever I miss a turn, or choose not to follow Greta’s directions, she says, “recalculating” in an exasperated, eye-rolling tone of voice. It’s like she’s thinking, You asked me for directions, or How hard can it be to turn when I say turn? But she never gives up on me. She has endless patience, not like SOME PEOPLE. She’ll recalculate till the cows come home. Or I do.
So you can imagine my concern recently when Greta’s voice began to falter, dwindling to a strangled, truncated croak. The screen directions were still there, but that requires me to take my eyes off the road and try to focus on that little screen. I might as well try and read a map.
Desperately, I tried the British voice, the male voice—none 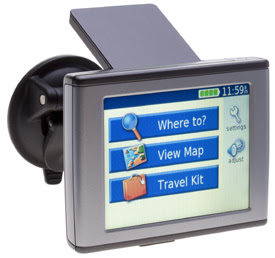 of them spoke to me, either.
My son has the same model Garmin. His has also begun to fail—in his case, the voice is fine, but the screen has dimmed until it’s nearly unreadable. He feels comfortable reading and wrangling electronic devices in the car. He’d rather have the screen than the voice.
Put the two together and you have one fully-functional Garmin.
It used to be when I headed out on a car trip, I would consult a map, plan my route, and carry multiple maps in the car in case I lost my way (as I often did).
With Greta aboard, I just launched, confident I could find my way there and back. School visit in a small town? Piece of cake. Find my conference hotel in a city filled with one-way streets? No problemo. Take back roads to the airport in a strange town? She has my back.
Without her, I feel cut loose, orphaned, like Hansel and Gretel without the breadcrumbs.
I contacted Garmin, only to find that Greta was eight months out of warranty. But they agreed to send a refurbished unit as a good will gesture.
And now she’s back—good as new, though just a little put out at being sent away. I’ll make it up to her. We’ll take some long road trips together—just the two of us.
Posted by CindaChima at 10:20 PM No comments:

Well, here's the tour so far. We are supposed to add dates in San Francisco. I posted the events on Google Maps and will update as needed. You can view details here or here.

Hope to see some of you at these events!!

This past weekend I participated in the Northern Ohio Society for Children’s Book Writers and Illustrators conference, planned by co-chairs Laurie Knowlton and Vicki Selvaggio, with their committee of volunteers. They had a record turnout of over 155 attendees (they had to cut off registration.)
Editors attending were Margaret Miller from Bloomsbury Children’s Books, Harold Underdown, author of The Complete Idiot’s Guide to Publishing Children’s Books, and Elizabeth Bewley from Little, Brown Books for Young Readers. Tim Gillner, Art Director from Boyds Mills Press handled the illustrator track. Authors included Andrea Cheng, Kathianne Kowalski, Bonnie Pryor, and me!
I presented a workshop called “Ensnaring the Wary: Engaging the Middle Grade and Young Adult Reader.” The two hours flew by (for me, anyway, and hopefully for the participants). 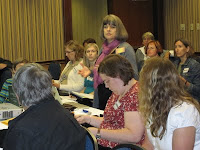 I always seem to have too much information to present. My university students used to accuse me of vomiting information on them. I shared that story with the workshop. Afterward, someone wrote that she was never so happy to be vomited on! (!) I don’t know that I can quote that on my website!
I showed off my sample copy of The Demon King. Gorgeous!

Between the workshop and manuscript critiques, I didn’t have the opportunity to attend the other breakouts, which looked awesome. Harold presented a great, upside/downside overview of the current state of the publishing business, and Elizabeth Bewley spoke in general session on writing for teens. Margaret Miller’s presentation on working with an editor made us all want to work with her!
Conference attendees ranged from newbies exploring the world of children’s lit for the first time to multi-published experts. Laurie asked attendees to group by geographic area so critique groups could be formed to carry on the journey.
I had a great time reconnecting with friends. I’m still smiling!
Posted by CindaChima at 12:21 PM No comments:

Don’t get me wrong—I love the revision process. When I teach writing workshops, I always tell students, if you can’t deal with revision, don’t be a writer, because you’ll be doing it all your life.

And, of course, if you send it out, and you’re lucky enough to be published, you will be revising in response to your editor’s feedback. Ideally, that partnership results in a better book. But that doesn’t make it any easier when you get that editorial letter and the work you thought was basically done isn’t.

So I’m in the middle of this major revision. I’m wrestling with this 500+ page manuscript. I wrote 150 new pages, revised everything else, then cut 100 pages. Today I decided to move this one scene. But one thing led to another, and now everything is scrambled. This is the kind of situation that results in mistakes. And heavy drinking.

When I was in junior high school, I was a volunteer at a VA hospital. They didn’t allow visitors under 15 on the floor, but I was there, at 14, volunteering. One thing that struck me was that the patients always looked worse when they came back from surgery—pale and wounded, sick, and confused. On life support. And I remember thinking—this is a good thing?

Depending on the seriousness of the surgery—er—revision, your book can look worse before it looks better. Sometimes you’re afraid it will never recover. You hope that once you’ve repaired the plot holes and cut away the dead tissue, your book will be healthier for it.

Not enough metaphors for you? I’m a professional writer, after all.

My husband works in stained glass. He was making a lamp recently—had it almost finished, and set it aside on the floor to clear his work table so he could work on something else. Somehow, he stepped on it, shattering several panels. He had to cut out the unsalvageable, replace it with new, and somehow make it fit back together.

He came upstairs and said, “I think I finally understand what revising a novel is like.”

I said, “Welcome to my world.”

I was secretly glad I didn’t have to solder anything. Words, I can do. 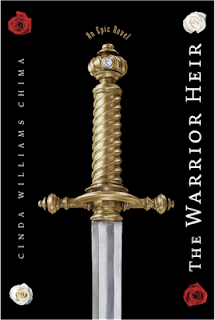 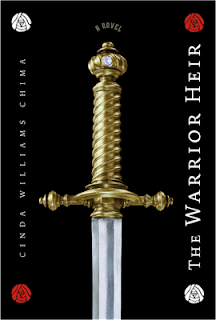 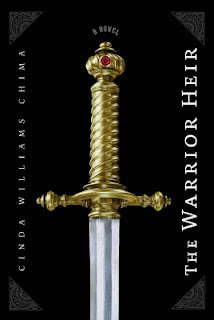 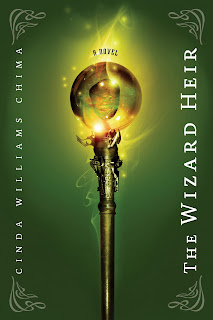 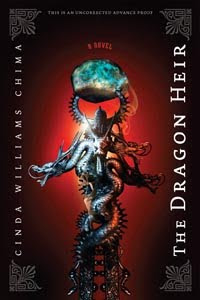 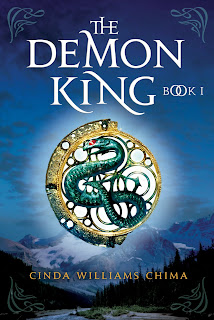 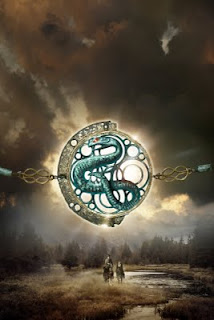 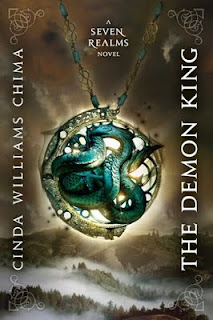 Posted by CindaChima at 10:34 PM No comments: