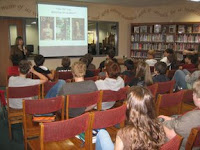 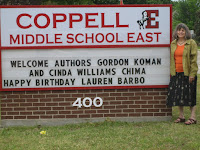 This week I visited three middle schools in Coppell, Tx while attending the Texas Library Association meeting in Dallas. Wednesday I visited Coppell Middle School West with librarian extraordinaire Rose Brock. My editor, Arianne Lewin, went along with (and was able to step in and advance the slides when the remote didn’t work). It was a great experience, the kids were so smart and well prepared—they had lots of good questions for me. Here’s a shout out to awesome Coppell West readers!

On Thursday, I visited two more Coppell Middle Schools. Coppell East librarian Virginia Greene picked me up in the early morning. Turns out Virginia is a fantasy fan, so we had a great time comparing notes. After two sessions at Coppell East, I traveled to Coppell North, where Lynn Chevron is the librarian. I’d already received emails from Coppell North students before I ever got there! I met lots of motivated young writers and fantasy fans at both schools. And it makes such a difference when students have prepared by reading the work. Then we can collaborate to make the visit successful, and it’s all good.
School visits are exhausting and energizing at the same time. How can that be?

Here’s a shout out to Coppell East and Coppell North, and thanks to Rose Brock for arranging all this.
Posted by CindaChima at 8:44 PM No comments:

Updates from the Texas Library Association 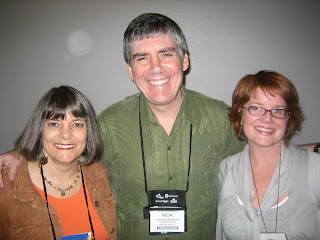 I'm just wrapping up an awesome week at the Texas Library Association meeting. These Texas librarians rock! On Tuesday, I was on a panel of YA fantasy authors, entitled “Strong Voices, Other Worlds” with fellow authors Libba Bray, Suzanne Collins, John Flanagan, Jacqueline Kolosov, and moderated by Rick Riordan. Such smart, witty people—I just wanted to sit back and listen myself.

Rick asked us why we write fantasy fiction and Suzanne had an interesting answer. She said that sometimes an author can address issues in fantasy fiction that are too intense to deal with in YA realistic fiction. The element of fantasy provides a bit of a buffer, in a way.

We were asked about series vs. stand-alones. Series novels are common in fantasy. After going to all the trouble to create a fantasy world and magical system, we authors want to work it for awhile. My Heir series takes place in Ohio, so I didn’t exactly have to create a world, but some of us also don’t like to let go of our characters. That was what happened to me when I finished Warrior Heir. It would just be a lot more convenient if I planned things out more. By the time I get to Book 3, I’m thinking, “Well, if I’d known when I wrote Book 1 that this was going to happen in Book 3, I’d have set it up better. But Book 1 is already in print. I want to go out to bookstores and put sticky notes in The Warrior Heir.

Libba discussed how she created the strong female characters in her Victorian fantasy series, set in a time when women had little power. I could listen to John Flanagan’s Aussie accent all day. And Jacqueline discussed her dual role as college professor and fiction writer. Rick did a fantastic job as moderator. He was clearly a home-town favorite among the librarians in the audience.

Wednesday morning I attended the opening session, with Dave Barry and Ridley Pearson. I just kept thinking, Thank God I don’t have to keep up with them! Dave Barry could read the phone book and it would be hilarious. I looked around the auditorium to see thousands of librarians in black pirate eye patches. I think I’m going to adopt Dave Barry’s method of disciplining teens through the strategic use of embarrassment.

I passed by the hundreds of librarians lined up for Dave and Ridley’s signing on the way to my own, in the author area of the exhibits. I had lots of fun, meeting librarians from all over Texas, including Nancy McGinnis from Killian Middle School near Dallas. I’ll be visiting Killian at the end of May for a One Book, One School event.

Wednesday afternoon and Thursday, I visited 3 different middle schools in Coppell, Tx. More on that in my next entry.
Posted by CindaChima at 6:28 PM 1 comment: