In Case You Missed It--There IS a Fourth Seven Realms Book Coming!

It’s come to my attention that some people still think the Seven Realms series is a trilogy.
The confusion is understandable, because it was originally meant to be a trilogy, and it still says “trilogy” several places on my website (me and the webmaster are putting our heads together over that.)
“Why did it end that way?” some readers have asked, after finishing advance copies of The Gray Wolf Throne. “But we still don’t know what happened to Han and Raisa!” 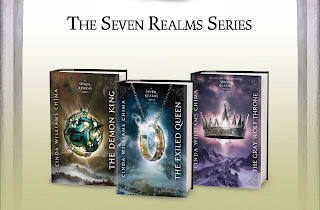 If the story seems unfinished, it’s because it is. The fact is, I ran out of room in book 3. I just couldn’t fit everything into three reasonably-sized books. (I think you’ll agree that the books aren’t skimpy as is.) My editor kept saying, “Maybe you need four books,” and I kept saying, “No, no, no, I know I can do it in three.” But I was on page 576 and nothing was resolved.
So there is a fourth book—I wouldn’t lie to you. It’s written and already turned in and in the editing process, and I’ll be announcing the title on tour. I can’t wait for you to read it. I love the ending, and hope you will, too.
Some of you will say, “Yay! Four books!” Some of you will say, “Grrr. Now I have to wait another year to see what happens!”
Bottom line—too big of a story, too little space. It ain't over yet.
Posted by CindaChima at 12:38 PM

Email ThisBlogThis!Share to TwitterShare to FacebookShare to Pinterest
Labels: The Seven Realms

You know, I was reading The Gray Wolf Throne a couple weeks ago, and once I got to the middle I'm like, how in the world with the author possibly wrap up the series with this book?!

Then one of my Goodreads friends told me that the series is actually a quartet, and it was all I could do not to dance with happiness. Haha. Yep, I'm REALLY excited about Book 4! (Truth be told, I wouldn't mind if there were even more books in the series. I really hope you write a spin-off series. Okay, now I positively sound like a way too eager fan. I should probably shut up now...)

Aleeza, I'm glad that you're glad. I hate it when I get the feeling that an author has s-t-r-e-t-ched things out to make an additional book. Trust me, that's not the case here. I think you'll find there's plenty more to do in Book 4. CWC

So excited there will be more in the series.

I can't wait for the release next week! And I don't mind waiting for a fourth book...I always become a bit sad after finishing the last book in a series.

I was disappointed today when I finished the grey wolf throne and not all of the questions were answered. So, I decided too check out your blog and this post relieves me greatly. EEEP! THERE'S GOING TO BE ANOTHER!:)

Eliza, sorry about the confusion. You weren't alone. Tell everyone you know--my communication doesn't seem to be reaching everyone!

I'm soooooo glad that there is a fourth book to the Seven Realms. When I read the ending of The Gray Wolf Throne I was so mad that nothing got resolved and now I can't wait until the fourth book comes out.

Sorry for commenting here. I know it's kind of random, but I have something moderately relatable to say. I just finished The Crimson Crown and am very confused. Don't get me wrong, I loved the living heck out of the thing, but, at least for me, there wasn't any closure. Was this intended to be the end?