In the good old days, before we left on vacation, we used to sit down with a bunch of maps and plan out any travel, turn by turn, ahead of time. We noted any major water crossings (note: how to get across Lake Erie, here?) and towns and bodies of water along the way.
By contrast, travel by GPS is impulsive, exciting, and full of surprises. Planning, bah! Having a GPS lulls you into a false sense of security. It also highlights how little you remember about geography.
We are currently traveling in Canada, with not one, but two GPS systems—one a Garmin, the other the Navigon app for the iPhone. Sometimes we run them both at once, and it is disconcerting when the ladies disagree.
They both sound calm, reasonable, and compelling. Even when they don’t know where the hell we are.
We were traveling through Quebec from the Bay of Fundy to Quebec City. To our right lay a huge body of water that went on and on.
“I think that’s the St. Lawrence River,” I say.
“That’s a river?” my husband says. “Isn’t it awfully big?”
“I wonder how big a river has to be to be called a seaway?” I muse.
In the map-reading days, we would have known. Or we could have checked the map. On the GPS there’s a large blue unidentified blob.
Somewhere in the middle of Quebec, the ladies become confused. “There is insufficient GPS signal to navigate,” the Navigon lady—let’s call her Navvy—says.  “Will resume when able. Or do you want to simulate?”
The Garmin lady (I call her Greta) merely repeats the same, increasingly desperate word: “Recalculating. Recalculating.” On the electronic map, she has us rattling across open fields. Good thing we’re driving the SUV.
Eventually Navvy recovers, and takes charge once again. We turn Greta off, because all that recalculation makes us nervous.
All is well until we get into the city, heading for the Hotel Frontenac in Old Quebec. We follow Navvy’s directions, turn by turn, until she sends past a sign that says, “Ferry Only.”
Ferry?
And, before we know it, we are paying our $9.75 and driving onto a huge ferry boat. We park in our designated spot and look at each other.
“Huh,” I say. “Are we supposed to be here?”
My husband doesn’t want to say, either way, so he furrows his brow and says nothing.
The ferry pulls away from shore, and we are off across the mile-wide St. Lawrence. On the opposite shore, we can see the looming fortress of the Hotel Frontenac, which is reassuring. At least we know we are heading in the right direction. 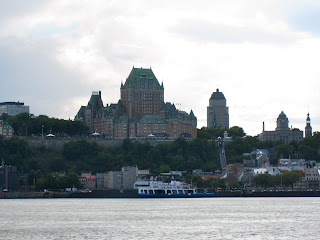 Making the best of the situation, we get out of our car and take photographs of each other, acting like this was all part of the plan.
Once on the other side, Navvy takes us on a dizzying spiral through the narrow streets of Old Quebec, a fingernail of space on either side of our car. It seems that thousands of other tourists have already found their way here, with or without GPS’s, and they mob the streets, making things more complicated.
Finally, we turn through a stone arch and we are at our destination, a beautiful castle that looks like it could withstand an assault of thousands of Anglophonic tourists.
My husband and I look at each other. We never want to move the car again.
“How do you feel about valet parking?” I say.
He’s good with it.
Posted by CindaChima at 8:23 PM

Oh wow, i feel bad for you and your husband!

Im a Canadian and have had to go through Quebec MANY times(my family moves alot), and Old Quebec is just one of the worst spots to drive through!

Glad to know you managed to get to your destination though! ;)

Kai, but I LOVED Old Quebec...aside from the driving part. And even the ferry ride was cool, once we got over our surprise! CWC

it is really pretty there(we stayed in a hotel while driving from Ottawa to NS once)!