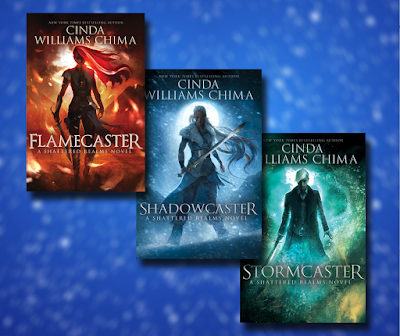 
A PIRATE ON THE RUN 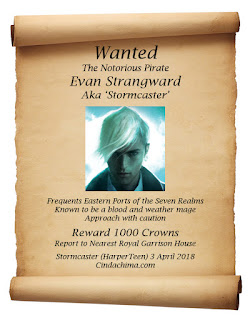 Vagabond seafarer Evan Strangward can move wind, waves, and weather, but his magical abilities can’t protect him forever from the brutal Empress Celestine. As Celestine’s relentless bloodsworn armies grow, Evan travels to the Fells to warn the queendom that an invasion is imminent. If he can’t convince the Gray Wolf queen to take a stand, he knows that the Seven Realms will fall and his last sanctuary will be destroyed. Among the dead will be the one person Evan can’t stand to lose.
A WARRIOR PRINCESS
Meanwhile, the queen’s formidable daughter, Princess Alyssa ana’Raisa, is already a prisoner aboard the empress’s ship, sailing east. Lyss may be the last remaining hope of bringing down the empress from within her own tightly controlled stronghold.
THE STORM OF WAR
Intricately interwoven storylines converge in this gripping novel as the warring Seven Realms struggle to unite against a horrific tyrant.
Posted by CindaChima at 1:48 PM