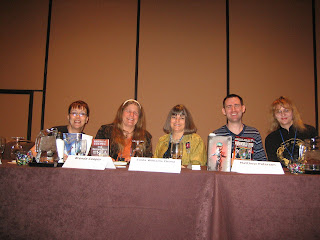 If you read this blog, you know I recently attended the World Fantasy Conference in Calgary, Ab. (October 30-November 2, 2008) The Guests of Honor included David Morrell, Barbara Hambly, Tom Doherty, and Todd Lockwood. The toastmaster was Tad Williams.
It was both my first time in Calgary and my first time at the WFC. By popular demand (well, one person), I thought I’d provide a few impressions of the WFC experience.
Most of the conferences I attend are 1) nutrition conferences and 2) conferences for people who write for children and teens. This con was different in several ways.
One happy difference is that many of the other cons I attend attract mostly women. This one seemed fairly evenly balanced between the genders. So the lines at the ladies room were much shorter than I am used to.
There were more free spirits at this con than at other meetings I attend. (I’m talking about the attendees, not the liquid refreshments, though I did spend time in the hospitality suites). Satin and velvet and sequins and glitz mingled with business casual which rubbed shoulders with torn blue jeans and tee shirts. (No costumes, though). Everyone was laid back and friendly, though I knew very few people before I came.
There was a certain good-natured confusion at the Con with regard to programming. Apparently final programming decisions were made rather late. So several panel participants didn’t realize they were scheduled to be on a panel until the very last minute. Some had conflicts, and didn’t make it at all. But most of the panelists dealt with life’s little surprises with good humor and flexibility.
Similarly, prep for panelists varied from seat of the pants and skin of the teeth to extensive. I was at the over-prepared end of the continuum, showing up to my panel with typed notes, FAQ’s and illustrative passages highlighted in several books—everything but an LCD projector. It all worked.
The dealer’s room was a clearing-house for fantasy literature, including fiction, magazines, and anthologies. It was a great overview of markets and product.
It’s important to note that the Cons are directed by an all-volunteer crew. It’s a huge undertaking, and bless ‘em for taking this on. Just the thought of it makes me want to roll under the bed. Except that’s where the monsters are.

Some Panels and Programs I Attended

Are Appendices Needed? (Tad Williams, L.B. Modesitt Jr., Julianne Lee, Susan Forest, Barb Geller Smith) – this refers to maps, glossaries, genealogical charts, and the like. The consensus seemed to be that authors themselves need maps, glossaries, etc. But if readers need them to follow the story, there’s something wrong. Many saw these features as value-added, cool stuff to entice and engage the reader.
Blind Alleys and Red Herrings: Mystery in Young Adult Fantasy (me, Brenda Cooper, Deborah Beale, Matthew Peterson, Alison Baird) This was my panel. We discussed how challenging it is to confuse and tantalize the diverse YA audience. Strategies included plot layering, pacing, chapter and title mechanics, and writerly sleight-of-hand.
The Writer’s Voice (workshop by David Morrell) Morrell spoke for an hour and a half without notes. (Whoa.) He described his challenging early life (he spent time in an orphanage and lived with a stepfather who disliked him). Morrell quoted Graham Greene in saying that an unhappy childhood is a goldmine for a writer. He says that the most important thing for a writer to do is to use his own history, to be himself, to pay attention to waking dreams.
YA Panel (Garth Nix, Linda DeMoulemeester, Sharyn November, Anne Hoppe, Kathryn Sullivan). Best take-away: Garth Nix said we should “never judge a book by its category, and never judge a category by its worst example.”
I already addressed the “Killing Off Significant Characters” panel in another post.
This con is very literature and art-focused, and many of the attendees appeared to be professionals. It was a great opportunity to connect with some marquee names of the fantasy game, including editors, agents, publishers, and authors. I spent some quality time with my agent, too.

Cool! After the World Fantasy Concention I interviewed one of the judges for my school's Sci-fi club (it was Dennis L. Mckiernan). I posted the interview on my blog. The link is:

I kind Liked his death. I was just sooo glad that Ellen didn't die..but i would really like to see more jack/ellen seph/maddie scenes in the book!!!!!