Tools Writers Could Use

My son Keith called me on the phone the other day when he was trying to avoid doing his homework. You are supposed to call your parents now and then when you’re away at college, right? Homework is a great incentive for keeping those communications lines open.
So Keith harked back to an old Dimitri Martin gag in which the Microsoft Word office assistant paperclip tries to help someone write a ransom note. “It looks like you’re writing a ransom note,” the paperclip says. “You should use more forceful language. You’ll get more money.”
So Keith said he wished a paperclip (or maybe a little calculator) would appear on his computer screen and say, “It looks like you’re trying to solve a quadratic equation. Would you like some help?”
I happened to be sitting in the writing den, and I got to thinking about the kinds of office assistant tools writers could use, built into their word processing programs. For example, the paperclip says:
It looks like you’re trying to resolve a major plot problem. Had you thought of hiding the townspeople in the salt mines?
Or: It looks like you’ve completely forgotten about the sidekick character you introduced in Chapter 3. Perhaps you should either give him something to do or get rid of him.
Or: It looks like your plot is getting rather bogged down in the middle. What if Alice turned out to be Jack’s long-long sister who murdered their father?
Or: It looks like 95% of your character names begin with M. Unless you are intentionally going for alliteration, you may want to change some of them to avoid confusing your readers.
Or: It looks like your main character has raked his hair out of his eyes 32 times so far and we’re only on p 163. Consider having him rub his chin or massage his temples. No more throat clearing, though.
Or: It looks like you’ve been working really hard today. Why don’t you take the rest of the day off and I’ll finish off your 1666 words for NaNoWriMo.
It could happen. Writers are dreamers, after all. 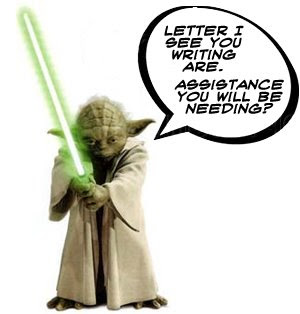 Office Assistant for Fantasy Writers
Posted by CindaChima at 1:56 PM

This is hilarious, Cinda.

Maybe mine could periodically pop up with "Perhaps it's time for more caffeine."

Or for me, "That's the 5th time this 1/2 hour you've left the computer. Get to work and finish this chapter!"