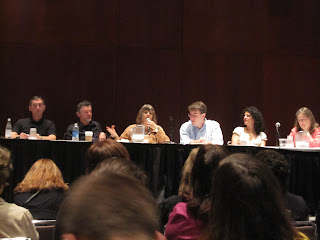 That’s one of the best parts of this job—rubbing shoulders with awesome authors!
At the Disney-Hyperion booth, The Gray Wolf Throne arcs were a hot commodity. I enjoyed meeting hundreds of Texas librarians and re-acquainting myself with many more. 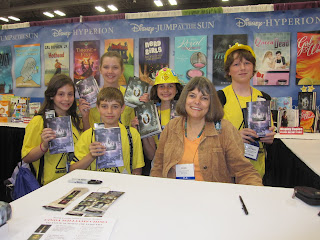 And then on to the Texas Teens for Literacy events. TLA does a fantastic job of getting teens involved in the conference. You could pick them out from their eye-catching yellow tee shirts. Why didn’t they have events like that when I was a teen?
First, I was on a panel with authors Melissa Kantor and Sophie Jordan. 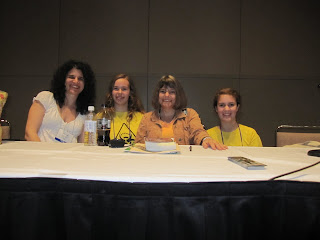 Then it was on to the Teen Mingle room, where the teens made me feel like a total rock star. 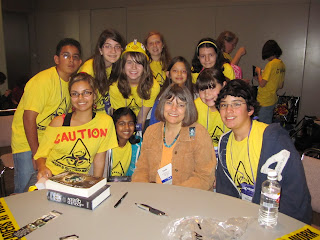 Bravo, Texas! Now on to the Writers’ League of Texas YA A to Z conference.
Posted by CindaChima at 9:35 AM

Hello Mrs. Chima!
How are you? I'm Ellie, do you remember me? Thank you for your message, I promise that I'll practice and improve my writing. ^^ Thanks for the support.
Well, I would like to know if your books, from the other serie, will be published in Brazil. Please, I just can't stand to read them!!! Thanks for writing such amazing books! Hugs from your brazillian fan, Ellie.

Ellie, glad to hear you're a fan. My agent is working to sell the other series in Brasil, and I hope it happens! Keep spreading the word.

I live in Texas... sorry I missed you. It's a bit of a drive to Austin. lol But good to know our libraries have the Chima stamp of approval.

I'm with Livia. I envy them too. Love your books

Allison, I'll be doing an event in the Houston area in May. Does that help? CWC

i loved the grey wolf throne ms.Chima!!!! it was soooooo good.i was so glad to meet you at tt4l :)
thank you for the great book the you write