There comes a time when virtual commiseration, applause, counsel and butt-kicking isn’t enough. And so my online critique group, the YAckers, meets in person about once a year.
We live in all parts of the country, and so we vary the meeting place. We try to go where the weather suits the clothes we wish we were wearing, with things to do and see when we can no longer squint at the screen and printed page. Ever since certain noisy people got scolded by hotel security in Wilkes-Barre, PA, we try to rent a house or B&B so we have a place to ourselves. We’ve been to Park City Utah, rural Pennsylvania, and San Antonio. And this year we chose Memphis, TN, where we rented the Lake House, a large house on a small lake in Cordova, TN.
At first, I was cool to the idea of Memphis. After a long winter and cold, rainy, snowy spring, I was ready for beach time. As far as I know, Memphis doesn’t have a beach. But as I read about the city, I was intrigued. There’s a lot of history there, much of it important to me. And music—the kind of throbbing rhythm and blues that gets your body moving in unanticipated ways. Finally, Memphis is warm and blooming in April, a cruel month where I come from.
More importantly, I was just beginning to realize that one of the characters in my current work in progress is FROM Memphis. Who knew?
It was a quick visit—a long weekend, really, and we had four novels to review. We knew we had to prioritize, to focus on good music, good food, and the celebration of a fallen hero. 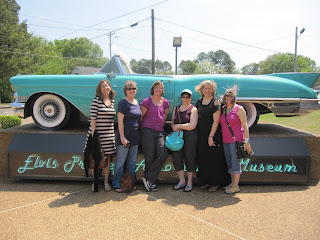 We visited Graceland, because the Elvis Presley story is fascinating and that man could sing. We ate at the Rendezvous and Gus’s Fried Chicken. We had dinner stage-side at B.B. King’s Blues Club. Afterward, we walked down Beale Street, past narrow alleys spilling music into the street, past signs that said, “drinks to go.” I collected sights, sounds, and memories. 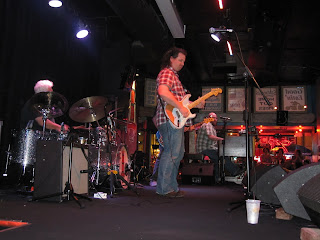 And, of course, we visited the National Civil Rights Museum. 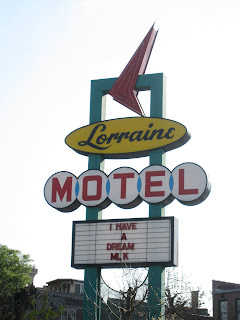 The Civil Rights Museum is located at the Lorraine Motel, where Martin Luther King was assassinated in the bloody year of 1968. King had come to Memphis to support striking sanitation workers. The motel rooms have been restored to that period. A wreath marks the spot on the balcony of the motel where he fell, and you can see where somebody replaced the bloodstained concrete.
Displays follow the history of the movement to the present day—including the bus boycotts, the Freedom Riders, the sit-ins at the Woolworth lunch counters, and the forced integration of Little Rock High School. And, everywhere, we heard that voice, and we heard those words that changed a nation. 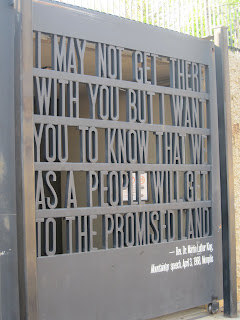 And I thought—those people were braver than I will ever be—to persist amid the vitriol heaped onto their heads, to cross through the fire line of history so that those behind them would have a better life.
Martin Luther King was a writer. That man could put words together like nobody else. It was as if he knew his days were numbered and he had to get it down.
Posted by CindaChima at 10:11 PM

If you can, check out this review of The Exiled Queen: http://www.readingteen.net/2011/04/audiobook-review-exiled-queen-seven.html?utm_source=feedburner&utm_medium=feed&utm_campaign=Feed%3A+readingteenfeed+%28Reading+Teen%29.
I'm the the friend she mentioned that bugged her to read your books!!! I'm so proud of me! Ha!!!
Livia

Livia, thanks for setting her straight, lol. Word of mouth is so important, so thanks for spreading the word.