Making My Peace with Winter 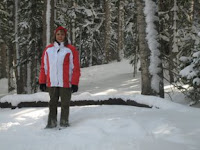 The Ranger at the Rocky Mountain National Park visitor center seemed out of place with her North Carolina drawl. “You only have a few hours, you say? Well, Trail Ridge Road is closed, you know, but the drive up to Bear Lake is real pretty,” she said. “Only we’ve had a few cars slide off the road this morning. The sand trucks just went out, so you may want to give it an hour or two before you set out.”
“That’s all right,” my husband said when we got back to the car. “An hour more or less won’t make any difference. I’ll just drive slow.”
That’s my husband. To him, weather is irrelevant. Me, I’ve never liked winter. Too many clothes, too much hassle.
So we drove up Bear Lake Road, creeping around the curves and tip-toeing over areas of black ice.
In Northeastern Ohio, where I live, we have what’s called lake effect. The weather can vary dramatically depending on the wind direction and whether you’re east or west of the lake. In RMNP, they have…mountain effect? We drove through several mini climates on our way up the road. In some places, the pavement was showing, and in others, there was solid snowpack and three foot walls of snow to either side, left there by the plows.
I knew I was in trouble when I saw the other hikers in the Bear Lake parking lot squirming into gaiters and snow pants. My husband and I were among the few people who were not strapping on snowshoes.
I’d thought I was prepared. I’d put on my brand new Spyder Thinsulate ski jacket and hat and toasty warm gloves. I wore my hiking boots and wool socks. But the brand of the day seemed to be The North Face, and with the temperature in the teens, the wind bit through my jeans with such force I looked down several times to make sure I hadn’t forgotten to put them on.
Sigh. Whether its formal dinners and weddings to hiking in Rocky Mountain National Park—I’m always underdressed.
The sign said, “Bear Lake, 250 Feet.” Even I thought I could make it that far. The path to the lake overlook had been packed down by many snowshoes. Once there, we noticed that people were snowshoeing around the lake. “Bear Lake Trail, .5 mile.” Half a mile? Hah! No problem. I walked three miles regularly at home.
At first, we seemed to be doing better in our hiking boots than our friends in their snowshoes. But the further we went, the less traffic there’d been before us, and the looser the snow. Soon, I was struggling, between the knee-deep snow and the climb. We decided to take our chances down on the ice. Surely the snow wouldn’t be as deep down there.
Wrong! The far end of the lake was piled in deep drifts over a seventeen-inch base. It was like swimming waist-deep in quicksand--for vertically-challenged me, anyway. “I can’t do this!” I gasped, and we headed back for the overlook.
From there, we took another groomed trail to Nymph Lake. I’d been there in summer, and was amazed at how different it looked. The stark skeletons of trees cast blue shadows over the snow. Pines brushed by the wind sifted snow like glitter onto the trails. Although there were a lot of people there, the sounds seemed muffled and muted, the woods robed in a cathedral hush.
On the way back down, we were swooshed several times by cross country skiers who were having way too good a time. And I thought, maybe I’ll get myself some long underwear and pull out those cross-country skis.
Maybe I’ll even get myself a pair of gaiters.
Posted by CindaChima at 9:06 PM