We headed over to the Washington Convention Center in order to get first dibs on the loot…er…visit the exhibits. In the registration area I ran into the other members of the red and white vertically challenged writers’ club and had to take a photo. Here’s me, Mary Pearson and Nancy Werlin. 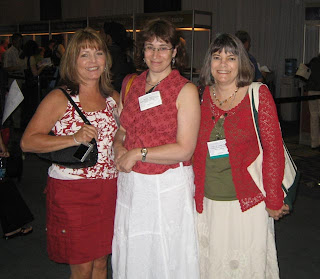 Nancy Werlin provided a two-minute orientation as we descended to the exhibit floor. For example, when snagging roomy carry bags from a vendor, do not make eye contact. Martha and I ran into Gail Giles and she tipped us that we could snag free galleys of Right Behind You at the Little, Brown booth. There were also wonderful pickings at the Harper-Collins booth. By then we were in total exhibits mode, so if we saw someone with something cool, we’d ask where they got it and hustle over there.

Had lunch at a French bistro with Debby and Jody, passed out postcards and bookmarks to librarians from Michigan. Debby went to meet with her editor and we went back to the convention center for my signing at the Hyperion Booth at 3 p.m. It was very cool, met multiple Hyperion staffers and librarians and book lovers from all over. Here I am in the booth with Donna Bray, Executive Editor at Hyperion Books for Children. 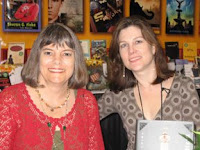 When the signing was over, zipped over to the Scholastic booth to get in line with a thousand Harry Potter fans (well, older than the typical HP fans) to snag the Harry Potter bags and bookmarks they were giving away.

Here’s my haul from the first day. 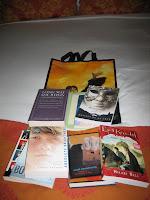 Posted by CindaChima at 2:37 PM