Whoa. This idea of “blogging from ALA” business is harder than it seems! First of all, I took an involuntary tour of greater Maryland on my way in from the airport on the Super Shuttle. Missed a lovely dinner with writing friends Martha Peaslee Levine, Jody Feldman, Debby Garfinkle, Mary Pearson, and a chance to meet the Newbery “honored” Cindy Lord.

I checked in at the lovely Monaco Hotel, dumped my stuff, and hoofed it down to the Renaissance Hotel in time to hear the last couple of speakers at the Printz Reunion, Walter Dean Myers and Ellen Wittlinger. Sadly, didn’t get to hear Laurie Halse Anderson and the others.

I rendezvoused with Martha, Jody and Debby, who were kind enough to stick by me while I wolfed down multiple canapés at the Booklist YALSA 50th Anniversary cocktail reception. Christina Getrost, the teen librarian at Stow-Munroe Falls Library stopped by just as my blood sugar began to normalize. Two glasses of wine and I was feeling restored enough to walk back to the hotel, though perhaps no longer blog-worthy.

The Monaco Hotel was once Washington D.C.'s General Post Office, built in 1839 by Robert Mills, the same architect to design the Washington Monument. It’s really cool—full of marble and pillars—kind of like a small-scale palace. Except people kept asking where our hotel was, and I kept having to say F and 7th . Which sounded like F-ing 7th. And they’d say, why, is it really far away?

Here’s my roomie Martha on the roll-away bed in her tiny alcove. Notice that she is between me and my computer so there could be no blogging that night. 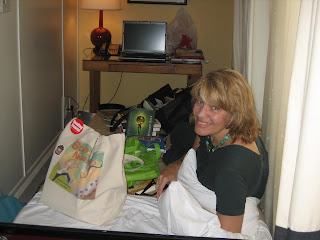 Email ThisBlogThis!Share to TwitterShare to FacebookShare to Pinterest
Labels: ALA