Some long-time readers may remember my post about spending the night in what I called the American Airlines Holiday Inn (a baggage cart in LaGuardia Airport.)
This week, I flew to New York City for a memorial service for literary agent Ralph Vicinanza. When I booked my flight, a direct flight to NYC would have cost $750. A flight that connected through Philadelphia cost $250.
Not a difficult decision, based on cost, but, still, I hesitated. I knew if I booked a connecting flight to the east coast in December, I would live to regret it. But I did it anyway.
When I flew out of Cleveland, it was snowing like crazy, the local phenomenon we call “lake effect.” After serious de-icing, the plane still took off almost on time. We know to expect snow in December in Cleveland.
All went well until the return trip. I was at (you guessed it) LaGuardia Airport, this time flying U.S. Airlines. Mind you, there was no bad weather at LaGuardia, or in Philadelphia, where I was headed for my connection. But there were delays and cancellations all over the flight board. 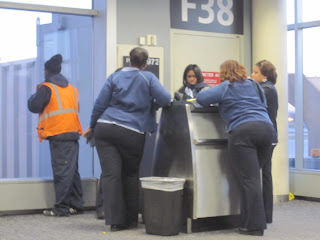 How You Know You're Not Gonna Fly
First, we had no plane. So they switched me to a flight that had a plane. Then  we sat on the runway forever because of air traffic, making us late enough to endanger my connection. As we deplaned in Philadelphia, they handed us boarding passes for rebooked flights the next morning—just in case we missed the flight to Cleveland.
That should have been a clue. Still, three of us heading for Cleveland raced to take the shuttle bus to the next terminal. We arrived at our gate all in a lather, only to find the gate deserted. Our plane had just left.
Together with another passenger named Sue, I headed for the US Air service center, hoping we could still get out that night on another airline. The genial man at the service counter said, “Oh, no, all the airlines stop flying at the same time. There’s no more flights tonight.”
“Well, then,” I said, not looking forward to another night on the floor, “Could you put us up for the night? I mean, this isn’t our fault.”
“Depends on the reason for the delay,” he said, clicking through screens on the computer. “Nope,” he said, shaking his head mournfully. “The delay was due to air traffic. We don’t pay for air traffic delays.”
I don’t get that. If there’s too many planes in the air at once, the airlines put them there. They schedule so tightly at hubs on the east coast that any minor perturbation throws the schedule into a tailspin. Figuratively speaking.
Just as he got done explaining this, Sue began to cry. She had children to get to school the next morning, she didn’t know who was going to be able to pick her up at the airport, and, clearly, she didn’t want to spend one more minute in Philadelphia.
I could totally relate. I cry when I’m angry and frustrated, too.
As Sue went to get a tissue, the supervisor at the next terminal asked, looking worried, “Is she going to be all right?”
“I don’t know,” I said, shaking my head. “We just met.” My expression said, She looks awfully fragile to me.
The supervisor turned to the clerk. “Give them a voucher,” she said abruptly.
“What?” he said. “But…”
“Give them a voucher,” she repeated, turning back to her screen.
And so it was that I stayed in the U.S. Airlines Ramada Inn. And slept in a bed.
Thank you, Sue. And thanks to that supervisor.
Posted by CindaChima at 12:15 PM

Email ThisBlogThis!Share to TwitterShare to FacebookShare to Pinterest
Labels: airlines, rants, US Airways