Why I Write Fantasy Fiction

Why I Write Fantasy Fiction
I don’t know which is worse in the eyes of some readers and writers of SERIOUS BOOKS—writing fantasy fiction, or writing for teens. In the tone of voice an adult might use when admiring a two-year-old’s childish drawing, they say, “Keep at it, and maybe one day you’ll get to write a real book.”
I’ve previously discussed being dissed as a writer of fantasy fiction by the literati. I’ve also explained why I write for teens.
Truth be told, writers don’t need to seek out more opportunities for humiliation—our lives are humbling enough as is. So why write fantasy?
1.  The easy answer is that fantasy sells, and has been selling for years, especially to young readers. On a recent New York Times bestseller list (October 1, 2010) eight of ten bestselling chapter books and five of ten bestselling series books were fantasy novels of one kind or another. Fantasy these days is such a broad genre that there’s room for a broad range of readers and writers.
That said, I think it’s a mistake to follow trends. Writing a novel is difficult enough if you like what you’re writing. I think readers can tell when you’re just going through the motions. So, keep an eye on the market but write from the heart. Not every genre suits me, but fantasy does. Therefore I write it. That’s not to say I always will.
2.  Fantasy expands options when it comes to plot and conflict. The element of magic is one more weapon in the writer’s arsenal. Not only is Buffy the Vampire Slayer forced to navigate the social minefield of high school—but there’s a hell-hole under the cafeteria.
In The Demon King, Han Alister is an orphaned  streetgang leader who’s being hunted for murders he didn’t commit. Also, he’s carrying a magical amulet that could destroy him. 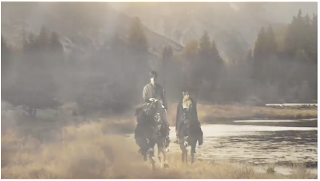 Princess Raisa ana’Marianna stands to inherit a political snakepit of a queendom from her mother the queen—if she can manage to hold off a rebellion of powerful wizards desperate to regain power.
In The Warrior Heir, Jack Swift is a high school student whose girlfriend just broke up with him. The principal hates him and he’s worried he won’t make the soccer team. Also, two powerful wizard houses are hunting him, meaning to play him in a deadly magical tournament.
Alternative worlds expand options as well. The Seven Realms series takes place in a quasi-medieval world. In medieval times, sixteen-year-olds were adults, for all intents and purposes. And so, as a writer, I can put my teenage characters into dire and dangerous situations; I can shovel heavy responsibility onto their shoulders and send them out on the road without worrying about Children’s Protective Services.
3. Fantasy provides a forum in which to explore Big Ideas in a safe place. I don’t mean safe for the characters—I mean safe for the reader. Long ago and/or far away provides a certain distance.  It’s clearly a created world, even if I manage to entice the reader into it.
In the Queendom of the Fells, I can address environmental and gender issues without the distractions of contemporary politics. I can explore revisionist history without pointing any fingers. I can put the conflict between good and evil into stark relief in an ecumenical way.
Fantasy can free the reader of pre-conceived notions, expectations, and biases and allow them to experience a different sensibility—new ways of looking at the world.
4. All fiction provides escape from real life, if only briefly. The reader chooses the escape that suits him or her best. A gritty contemporary novel may not offer escape from a gritty contemporary world.             Fantasy does.
5. Finally, and perhaps most important, fantasy is fun. In a world that seems bent on the destruction of pleasure reading, fantasy satisfies.
Posted by CindaChima at 7:54 PM

The reason I'm into Fantasy is because of Number 4. To escape the real world and enter something brand new and different! I live life every single day 24/7 and it gets tiring. I want an adventure so of course I read Fantasy. Haha Awesome post!

I like the fantasy that is close enough our world that it's almost believable... and YA is easy to do that because everyone remembers high school!

Fantasy is fun! It's a perfect escape. And we certainly need those.

I so agree that you have to love what you write. I love to read and write fantasy too. I love seeing the new worlds you and other writers create. I definitely love escaping into them when I read a good book.

Great post. I totally agree with you about Fantasy... not to mention I am very happy that you write fantasy because I love your books! :)