There are no poisonous snakes in New Zealand, nor scorpions nor deadly spiders, either. That’s a plus, in my eyes. 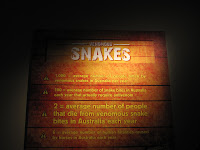 Australia is different—it is home to more poisonous snakes, frogs, spiders, lizards, stingrays, jellyfish, vertebrate fish, and other dangerous creatures than anywhere else on earth.

It’s become politically incorrect in the U.S. to demonize animals—even dangerous predators—as vicious killers. We even tend to romanticize businesslike kill-or-be-killed lifestyles. Nothing personal, but I’m above you on the food chain.

Australians, on the other hand, seem to embrace the dangers of life in the bush with relish.

It reminds me of the old Crocodile Hunter show—“These are the most DANGEROUS animals in the world!” And it was true in his case—he died of a stingray sting in the chest.

While in Sydney, I stopped in at Galaxy Bookstore, a specialty sci-fi and fantasy bookstore. I was chatting with one of the clerks, and said I was just beginning a tour of Australia.

“Watch yourself out there,” she advised me. “There’s lots of snakes.” Meaning, don’t let down your guard, even though right now you’re in the middle of a major metropolitan area.

Turned out she knows what she’s talking about. She’s specializing in reptile studies at university. Seems like a good field to go into down under. 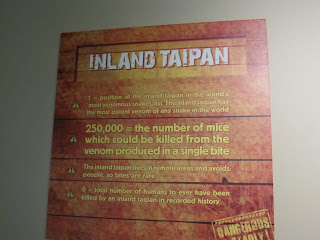 We visited Sydney Wildlife World, which was teeming with deadly creatures—dangerous birds, snakes, lizards, insects—you name it. In case you missed anything, lurid warning signs highlighted the most dangerous creatures on display.

Not enough worries? Across the way was the Sydney Aquarium, displaying deadly denizens of the deep.

Whatever the topic, it seemed to stray onto deadly subject matter. The guide at the seemingly low-risk koala breakfast explained to us the difference between poison and venom. “Venom works through the bloodstream,” she said. “It’s injected. Poison, on the other hand, can be ingested in different ways. We can touch a poison frog, eat a poison mushroom, breath in poisonous gases or brush a poison plant. Got that?” 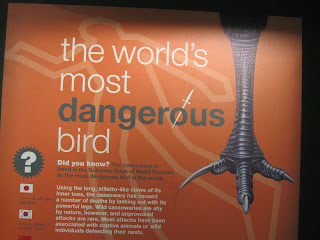 Remember the Foolhardy Family? They wouldn’t last a minute in Australia. Get past the fauna, and the flora and the terrain is dangerous, too—blistering deserts, unpredictable seas and shipwreck coasts, bottomless crevasses, unstable cliffs, and poisonous plants. Of all the rogue introduced plants, it seems the only ones that have caught on are the noxious ones. 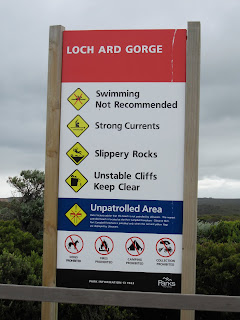 I’m a writer. My fertile imagination tells me there’s danger everywhere.  I hiked through Alaska, singing at the top of my lungs, to drive off the bears. I walked through Florida wetlands scanning the underbrush for wolf spiders and alligators. I hiked through the “national forest” – ha! – desert in New Mexico, my eyes darting to either side, searching for rattlesnakes.Never thought I'd have to watch out for the lizard in the laundry room!
My advice: Watch yourself out there—it’s a dangerous world.

I've always wanted to go to Australia. Though maybe I'll pack hiking boots - ones that come up really high - as opposed to, say, my flip flops or crocs. Perhaps that will help in some small amount. :)