A Visit to Taos Pueblo 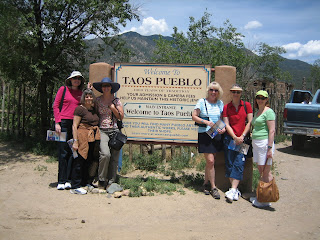 While in Taos, New Mexico, for the Kindling Words West writing retreat, I took an afternoon away from writing to visit Taos Pueblo, the oldest continuously-occupied community in the United States. The pueblo was built nearly a thousand years ago by the Taos Pueblo people, thought to be descendants of the extinct Anasazi Tribes from the Four Corners area.
According to the official Website, about 150 people live in the pueblo full time, while about 1900 live on pueblo land in Taos. The entire holding comprises about 99,000 acres, and the elevation of the pueblo is 7200 feet.
Six of us writers arrived at the pueblo in two cars, but Mary Beth and I soon fell behind the others. As we walked in, we were met by an entrepreneurial young girl clutching a fistful of silver bracelets. “How much?” we said. “Five dollars,” she said. And the bargain was struck.
I was enthralled by the architecture, the shadow-blue mountain backdrop, and the crystal clear Red Willow Creek that divides the pueblo into north and south. Splashes of faded color on wooden doors stood out against the adobe browns and golds, contrasting with creamy whitewashed walls. 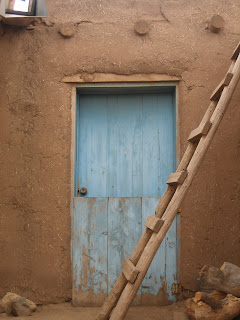 There were dogs everywhere, too, in weathered pueblo colors—white and brown and tan.
St. Jerome’s Church is a focal point of the pueblo. It was built about 1850 after the U.S. Army destroyed the previous church. Everywhere I looked, Catholicism jostled up against the original kiva religion, but after more than five hundred years, they seem to coexist comfortably.
Some of you may know that I am fascinated by graveyards. The pueblo graveyard was built in and around the ruins of the old church. The burying ground is prickly with wooden crosses decorated with bright plastic flowers and dried corn amulets. A scattering of modern granite tombstones seems out of place. Old clamored against new, creating a delicious tension. 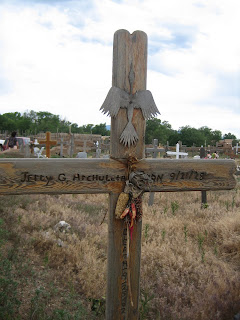 In the shops, we stopped and chatted with painters, leatherworkers, silversmiths, candle and soap makers. Children off school for summer vacation sat in the shade, stringing beads. Some were already sounding the lament of late childhood—I’m BORED. It’s SLOW. Can I go get a DRINK?
Mary Beth immediately bought a drum, which she was forced to carry the rest of our visit. I was tempted by smaller, lighter-weight, more portable items—the silver and turquoise jewelry on display everywhere. We visited Robert Mirabal’s flute and music store, where Mary Beth bought a lovely flute and I bought a CD. 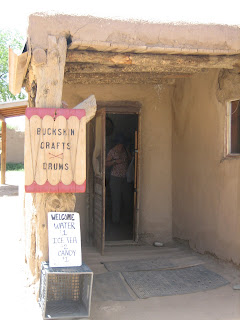 I felt warmly welcomed everywhere I went, and I tried to slow my natural frenetic pace, to settle into chatting and visiting and taking my time. We bought flatbread pastry with prune filling and dodged a few sprinkles that splattered into the dust. One storekeeper peered out of his doorway and said, “This happens every afternoon, and the tourists scatter. It never lasts more than a few minutes.”
Eventually I made my choices—a grandmother storyteller doll ornament from Thelma Lujan; a silver eagle-feather pendant set with turquoise from silversmith Arthur Lujan, and a necklace of turquoise and silver beads from Arthur’s niece, Redhill Flower.
Sometimes the juxtaposition of ancient and modern, tourist and indigenous peoples seems jarring and exploitative. But I came away from Taos Pueblo with the impression that this was a people with a strong identity, a respect for the past, and a plan for going forward. 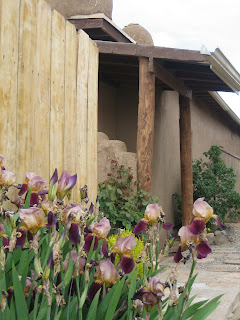