The Difference Between Writers and Engineers

I recently travelled with my husband to an aerospace meeting in Orlando as an “accompanying person.” This is the new politically correct term for what used to be called “spouses” or even “wives.”
This prompted my agent to ask whether I could be both an “accompanying person” and an “interesting person” (see previous post.) And I said, yes, of course, I’ve always been good at multi-tasking.
I attended the “accompanying person” breakfast, which was also crashed by a few savvy actual meeting participants. I soon became convinced that it is far better to be an “accompanying person” than an participant in the conference. There are none of those pesky meetings to attend nor presentations to deliver. No need to feel guilty about sitting in the hot tub at mid-day. No need to—gasp—put on dressy clothes in the Florida heat. 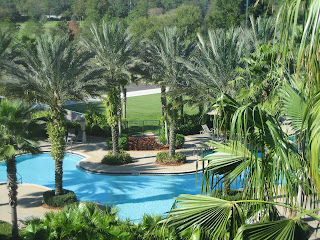 Note to readers, agents and editors: I was, of course, working—writing and revising—the whole entire time.
Disclaimer: The following are my random, unscientific, oversimplified and probably totally skewed observations.

The aerospace meeting had a very different feel from the writers’ conferences I frequent. For one thing, most of the attendees wore shirts and ties and even suits and sports coats. Even the graduate students wore jackets. Fortunately, they were mostly men.
Dress at writers’ conferences is difficult to describe. People who commute from their kitchen tables to their dens are used to being comfortable.
Most neither need nor desire “business attire” nor would they put it on without a gun to their heads. Writer attire varies from Bohemian to bead-and-sequin extravagance, from punk and emo to retro hippie, from cutting-edge fashionable to suburban casual, from sweats and slippers to late thrift shop grunge.
Which is fine with me.
My view: It’s tough enough to be a writer without being required to wear neckties or hosiery.
As noted above, the engineers were mostly men. Writing conference attendees are of mixed gender except that conferences for children’s writers seem to attract a larger share of women.
During the aero conference, the food court at the hotel was packed each morning at 7 a.m. by conference attendees seeking breakfast before the 8 a.m. start time.
My experience has been that writers tend to slope in late, blinking like owls, with gigantic cups of coffee in their hands. So this is what 8 a.m. looks like.
One thing writers and engineers have in common—they tote around notebook computers.
I suspect that most of the engineers have good-paying jobs with benefits. Most writers long for good-paying jobs with benefits. Or spouses/accompanying persons with good paying jobs with benefits.
It might be interesting to plan joint right brain/left brain conferences for writers and engineers, complete with singles mixers for the unattached.
Posted by CindaChima at 3:59 PM

The "Workspace Provided for Accompanying Persons" appears to be very nice and relaxing, all the necessary ingredients for a rewrite or contemplation for more plot points.