Drama in the Every Day 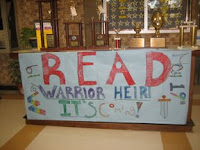 So the other day I’m on my way to the airport to leave for a school visit in Dallas. I’m within two miles of the airport exit when traffic on the freeway comes to a standstill. Emergency vehicles scream past us on the median, and I realize there must be a serious accident up ahead. My pulse accelerates as I contemplate the consequences of missing my flight—a missed dinner with a group of librarians and a school visit that’s been nine months in the planning. After ten minutes of parking lot frustration, cars begin squirting off the highway through whatever openings they can find. I follow them, even though it’s not part of my long term survival plan to drive the wrong way down a freeway entrance ramp.
I drag out the GPS, which sends me into a construction zone, a maze of flagmen and single-lane tunnels between massive construction equipment. My blood pressure rises. Amazingly, I make it to the airport with just enough time to get to the gate. Whoa, I think, taking deep cleansing breaths, already crafting the story I’ll tell. There’s always drama in my vagabond life. Drama drama drama.
As I’m standing in line to go through security, I hear the twenty-something guy ahead of me tell the screener that he’s just been in a car accident. I focus in more closely, and see that his hand is wrapped in gauze and blood is spattered over his khakis.
“Um,” I say, “Were you just in an accident on I-71?”
“Yeah,” he says. “Someone lost control and rammed our car and we rolled several times.”
“Um,” I say. “How did you get here?” My unspoken question is, How in blazes did you beat me?
“Well, I called the airlines and they said if I missed my flight I couldn’t get out until tomorrow. I need to get to LA today. So I called my dad who works by the airport and he picked me up and brought me the back way.”
“What about the car?” I have visions of him abandoning his ride on the highway.
“The car’s totaled,” he says matter-of-factly. “My aunt was driving. They were loading it on the truck as I left.”
I can’t help staring at him. “Are you sure you’re okay?”
He seems embarrassed by the fuss. “Yeah, it looks worse than it is.”
“Do you know you have blood on your pants?”
He shrugs. “I think that’s somebody else’s.”
While we stood in line, he took several cell phone calls from worried people. “No, I’m fine,” he said. “Looks like I’ll make my flight.”
I felt like a hysteric next to that guy. I wanted to be hysterical FOR him (perhaps I could offer a service?) Being a writer, I wanted to write his story. So I did.
Posted by CindaChima at 3:47 PM

Wow. Great story. Love the drama. Wish I would make it to one of your signings when you come to Dallas. I keep telling myself I'm going to get out to Frisco (missed that one) and before that I was going to crash the CMS West visit, but never made it. Just wanted to tell you how much I love your books and you inspire me to be a better writer!
Glad you made it to Dallas safely!
Kimberly J. Smith
www.sydneywakefield.com

Dear Kimberly, sorry I missed you, thanks for the feedback, and hope perhaps we'll connect on a trip to Texas!

Great drama unfolding around you and you wrote a wonderful blog based on it.

I recently picked up The Warrior Heir and began reading it. Excellent so far.

By the way, I've linked you into my blog as I am writing fantasy. I find reading other writers blogs in the same genre to be very helpful in forwarding my inspiration in the correct direction.