RPG's and the Writing Life 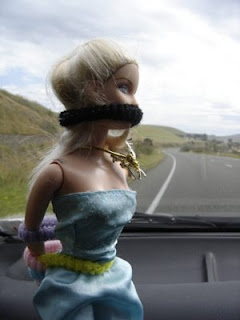 Young Writer emails me: All my friends are into role-playing games. Would playing RPG’s help with my writing? What games and activities can I do to help with writer’s block?

At first this question made me feel like Old Writer because I’ve never played a RPG.

Unless you count what I did as a kid on a larger stage. My friends and I spent a lot of time out in the woods, slipping from tree to tree, sneaking up on invisible enemies and each other, hanging out in hideouts eating provisions from home, stealing from the rich and giving to the poor, pretending to be spies and characters from TV shows and movies.

Indoors, we used Barbies as surrogates. They were never teenage fashion models (unless they were working undercover). They were defenders of the free world. I had a Ken whose felt hair was rubbing off, so he was the bad guy and had to wear the nerdy clothes. The Alan with the molded rubber hair was the good guy and wore the spiffy sports coat my mother had made. Barbie vamped about in a fur coat made from a muskrat collar.

We built prisons and fortresses out of encyclopedias, which could also serve as boats in a pinch. Barbie and Alan floated down jungle rivers in Funk and Wagnall’s boats, armed to the teeth and looking for trouble. Which usually came in the person of Ken.

Did this help me become a better writer? Well, maybe, though I have to say we focused totally on plot and gave short shrift to character development.

Back to your question. RPGs may provide a ready-made character and allow you to give him something to do. In some versions, you create a character and construct a skin and environments (See, I know a few things). You create character and create conflict and that is what story is all about.

But if you want to be a writer, sooner or later you’re going to have to sit down at the keyboard and write. Anything that gets in the way of that is nonproductive.

Here is a foolproof plan that will help you improve your writing:

I’ll address Writer’s Block in another piece.
Posted by CindaChima at 7:35 AM