Spectacle on the Airwaves 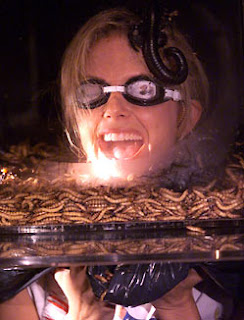 Maybe I write fantasy because I’m hopelessly ignorant of popular culture. I don’t watch much TV. It’s not because I have anything against TV. I love TV, or I used to. When I watched it. It’s been crowded out by the writing. And the family. And the full time job. And reading. And the volunteer stuff. And hygiene. And working out. And blogging, I guess. People ask if it’s important to be cutting edge on technology and entertainment to write for teens. And I say I hope not.

Even when I want to turn on the TV I never know what’s on. And I hate those on-air TV guides, where you have to stand there for ten minutes to find out there’s nothing on you want to watch.

I do watch the news while I’m cooking supper. And I know who else watches the news—it’s people with high cholesterol and reflux disease and overactive bladders, that’s who. At least, that’s who the commercials are directed at.

So I’m watching the news and a promo comes on for that evening’s lineup. The new show they’re pitching is called Fat March. They show video of corpulent people setting off on a 500-mile walk. I haven’t seen the show, but the purpose doesn’t seem to be to get people to exercise. This is spectacle, the arena entertainment of the airwaves. The promo concludes, “Watch Fat March tonight, right after Wife Swap.”

I’m apparently not the audience.
Posted by CindaChima at 1:04 PM

You would be pretty surprised. I am a contestant on the show. And is there some drama that makes things interesting? Sure. But the point they wanted to put out there was that you can do something as simple as walking to get yourself in shape. It really is going to be unlike any other reality show out there. And I'm my own worst critic so I would not be pumping something up just because I'm on it. If you give it a chance, you just might enjoy it.