Readers: Step Away from the Book

Posted by CindaChima at 11:26 AM No comments:

Keeping Busy at the Bookfest

...the twisty narrative works, propelled by the deft characterizations of tortured, frustrated, desperate Jonah and fierce, feral, determined Emma and held together by the ubiquitous soundtrack of the blues, both literally and metaphorically. Chima orchestrates a world gravid with smoke and grit and sudden death, throbbing with hopeless longings, messy affections, festering resentments, passionate hungers, inevitable betrayals, and miraculous flashes of beauty and grace.
A smoldering story soaked in tears, sweat and blood, constantly threatening to blaze into an inferno. Spellbinding.

Whoa. Fans self.  I also received more Enchanter Heir ARCs from my publisher and my first actual copies of The Crimson Crown paperback (coming your way October 1.) 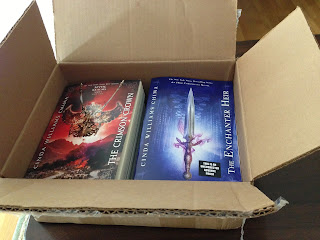 And, so...I think it's time for another giveaway!

Here are the deets! I'm giving away signed Enchanter Heir ARCs and swag to three lucky winners. Begins tonight at midnight, ends in seven days. If you won before, please give somebody else a chance to win. U.S. only!
a Rafflecopter giveaway 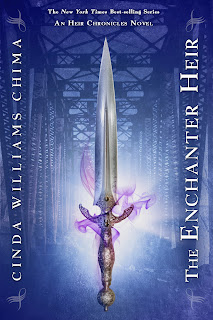 Running in the Rain with Lobsters