“Now Autumn's fire burns slowly along the woods
And day by day the dead leaves fall and melt.”—William Allingham

“Autumn burned brightly, a running flame through the mountains, a torch flung to the trees.”—Faith Baldwin

“Why is it always fire?”—Han Alister, The Crimson Crown

On Sunday, it was blustery and warm, so we decided to take a hike, reasoning, as we do on every fine autumn day, that it might be the last of the season.
We drove up to North Chagrin Reservation, one of the Cleveland Metroparks, to join a walk along Beechnut Fox Trail with Mindy, a Metroparks naturalist. 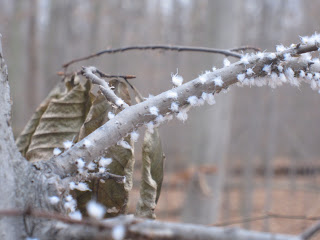 Along the way, we saw wooly aphids clinging to a tree—bits of fluff that wriggle in an uncanny, rather creepy fashion.
Mindy pointed out “hickory drops,” parasitic wildflowers that grow on hickory roots. And we spotted a large, rather obscene burl on one tree. 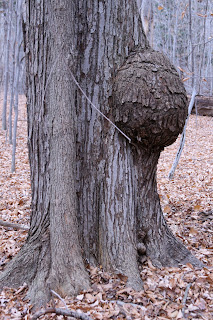 After the organized walk, we decided to hike further on our own. Mindy suggested the Sylvan and Overlook Trails, which wind through A.B. Williams Woods, a first-growth forest named for the region’s first naturalist. 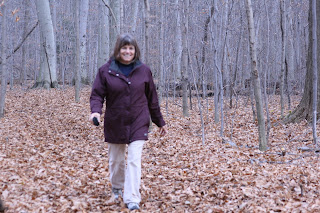 We scuffed through beech leaves, threading our way between towering red oaks, past the ruins of a nature center struck by lightning decades ago. We spotted a doe grazing along the trail. She didn’t seem particularly worried by our presence. 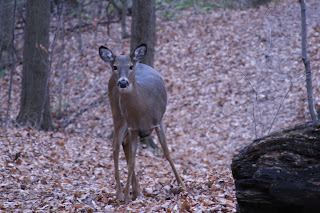 As dusk grayed the greens and browns of the autumn woods, the trail angled along a peninsula overlooking a deep ravine.
We looked down, and saw flames—like an angry, infected wound in the dark flesh of the woods. 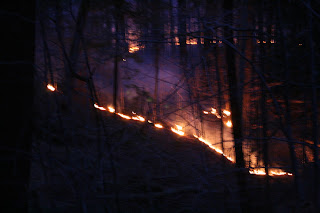 We stared, open-mouthed for a long moment.  The flames swept outward in a large circle, driven by the fitful winds. It mostly grazed on the leaf litter on the forest floor, occasionally sending sparks into the treetops.
Possibilities stumbled through my mind. Was it some kind of bonfire, or circle of bonfires? Druids? Wizards? Underage drinkers?
I pulled out my cellphone and called the Nature Center.
“Hi. Um, we were just on the autumn hike. And now we’re on the Sylvan Trail and there’s a big fire.”
I explained it all to Tracy, the other naturalist, and she called Ranger Dispatch. We hiked back to the trailhead to meet the ranger. Meanwhile, Mindy hiked down to where we had spotted the fire.
All the way back along the trail, the ranger kept saying, “How much farther is it?” and “Do you think it’ll go out on its own?”
When he saw it, he said, “I’ll go call the fire department.” 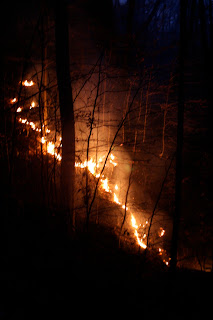 My husband and I hung out with Mindy at the top of the ravine, waiting for reinforcements, feeling helpless since we had no water, no foam--nothing to put it out with. When the wind died, the flames would crouch low, dying in the sodden leaves at the bottom of the creekbed. When the wind picked up, the flames would roar up the ravine. It expanded significantly while we watched.

A panicked squirrel raced past me, and I kept thinking of the forest fire in Bambi. 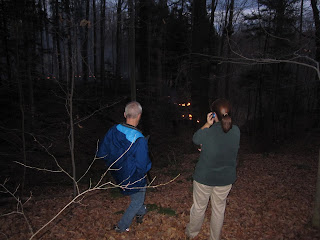 Soon, we heard sirens all around us, and Mindy updated the firefighters via her cell phone. We saw emergency lights flashing on Chagrin River Road, across the ravine. But nobody could figure out how to bring any equipment close enough to work the fire.
And then, blessedly, the wind died. By now it was full dark.
Eventually, we saw flashlights, and heard the crackle of radios as fire fighters worked their way through the woods toward us.
“Are you all right?” they called.
“We’re fine,” we said. “We’re glad you’re here.”
It didn’t take long for the Willoughby Eastlake firefighters to smother the flames on our side of the ravine. They were still working the fire along Chagrin River Road when we left. The firefighters loaned us a flashlight so we could find our way back to the trail.
The firefighters suspected arson. There had been several suspicious fires in the reservation.
Posted by CindaChima at 10:24 PM

What an amazing thing to witness - autumn actually burning. It was so windy on Sunday, the perfect condition to feed those flames. Good thing for cell phones.

I couldn't help but be reminded of the first time I met Han and Dancer (and fell in love with your books) as they watched the Micah-set fire chase through the forest. I was also intrigued by the quote from Han from Crimson Crown. Fire sure plays a significant role in his life doesn't it? Glad everything turned out ok in reality and I can't wait for Crimson Crown!