In different parts of the country, there are differing definitions of “bad weather,” depending on whether they actually have any. I mean, everybody likes to talk about the weather, right? Some of us just have more to talk about.
Where I come from, it’s not bad weather unless we can shovel it. Or unless trees are coming down around our ears. We take pride in our bad weather, the summer and winter storms that roll in off the Great Lakes. “Yep, I remember the blizzard of ’78. It was so cold we had to wrap up in snowdrifts to keep warm. It was so windy, the barn blew inside out and we had to staple the cows to the roof.”
California may have its Santa Anas and the Mediterranean its Mistrals and Sciroccos, but here on the North Coast we have the witch of November—the gales that sink ships on the Great Lakes.
http://en.wikipedia.org/wiki/Witch_of_November
We also have something called “lake effect,” where the Northwest winds pick up Lake Erie and dump it on our heads in the form of rain, sleet or snow.
http://en.wikipedia.org/wiki/Lake-effect_snow
In some parts of the country, if you predict “sunny and hot” you’ll be right ninety per cent of the time. Where I live, weather is a big deal. We treat our meteorologists like shamans (shamen?) and hang on their every word. Sometimes they are woefully wrong, but we forgive them. Predicting the weather around here is hard.
In the midwest, we’re good at coping with bad weather. The birth rate always skyrockets nine months after a big snowstorm or a power outage. I’m just sayin’.
My husband and I went on our first date during the Great Fourth of July storm of 1968. Um. We were—um—in preschool. The fireworks were called off, the trees came down, we went back to the house, and a great romance was kindled that  still burns today.
A couple of years ago I was in LA for the SCBWI Summer conference. The conference buzzed about the bad weather. It was raining.
“Maybe you’d better leave for the airport early,” people said, in the hushed, excited tones we reserve for the hundred-year storm. “There’s no telling what the traffic will be like.”
I was in San Antonio, Tx, last February, at a time that Mother Nature was relentlessly dumping snow on the Midwest.  People in SA were apologizing for the weather. It was…cloudy.
‘We don’t usually get clouds this time of year,’ they said, looking skyward and rubbing their chins. ‘Sorry ‘bout that.’
By whatever the local definition, bad weather seems to occur wherever I am. I’m in San Francisco in a downpour, and folks are saying, Huh! It never rains this time of year.
So right now I’m in Albuquerque, N.M. and the sun is baking the adobe and the hollyhocks are in bloom and people are remarking on the high humidity. 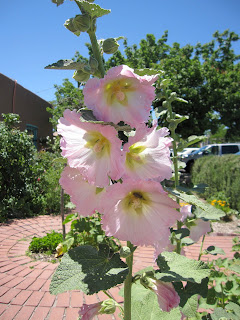 “Humidity!” I say. “You’ve never seen humidity until you’re out in a southern  Illinois cornfield on the Fourth of July.”
They blink at me. “Well,” they say, desperately, “it’s been pretty windy lately, too. And dusty. You should’ve been here last week.”
Pitiful.
Posted by CindaChima at 3:40 PM

Bad weather to an adult is often the best kind of stay home from school kind of weather to our children.

It's all in the point of view.

I wish I was in Arizona. I would have no problem with the, ahem, "high humidity."