I’m keeping some fast company!! I’m sort of rubbing shoulders with Harry Potter (who, of course, has been on the list for 196 weeks! That’s—um—almost five years.)

And, finally, The Dragon Heir is also #15 on the Indie Bestseller Children’s list for Children’s Books for August 17.
It may be for just one week, but I'm lovin' it. 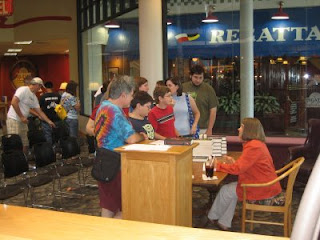 Here I am at Joseph-Beth Booksellers in Lexington for The Dragon Heir debut.
Posted by CindaChima at 12:24 PM

Continued success! (I have no doubt I'll see your name on the NYT list for many weeks to come!)

I still haven't received my preordered copy of The Dragon Heir from BarnesandNoble yet, so sadly I haven't been able to read it. Ah, the pain of patience.

Congratulations! May you sell many more books. I have read the first two and found them very enjoyable, and have given them to my local library so others may discover your enchanting story telling.