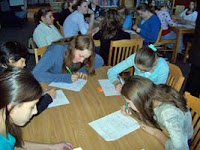 Dear Ms. Chima, I want to be an author and I have started several books but after I get two chapters written I get stuck. Can you help me?

I used to scoff at writer’s block until that one summer when I was writing The Dragon Heir and editing The Wizard Heir. Editing and writing are two different beasts. Writing requires the freedom to be bad. I found that after a long editing session with Wizard Heir, I couldn’t turn off that internal editor when I sat down to work on my fresh draft. After re-writing the same sentence 95 times, I’d drift off and begin Googling myself.

Know thyself. Be willing to experiment and understand your own process. For example, reading really good fiction might inspire one writer; it might discourage someone else.
Turn off that internal editor. Consider if you were reading a book and began editing every line. It would throw you right out of the story, right?
Be willing to write a bad first draft. Once you get the bones down, you can edit in beauty and grace.
I’ve heard the suggestion that if you work on the computer, you turn the monitor off. I’ve not tried that, but I can see how that might work. You can’t edit what you can’t see
Critique groups are wonderful, but you may not want to submit your work until you get the bones down. Critique of a work in progress can sometimes stop you in your tracks
Don’t feel like you have to have everything figured out. You may wait forever for that. The process of writing creates story. Trust it.
Figure out if an outline helps or hurts. For me, doing an outline crushes the creative spark. I don’t have to go on, because I already know what will happen.
Do some off-line plotting. I like to use the time after I wake up and before I get out of bed. Allow your mind to explore the “what ifs” around your story. Block scenes in your mind. Speak dialogue when you’re out driving. Scare the other drivers
Butt in chair, Jane Yolen says. Butt in chair, and write. Even if it’s some scene you don’t even know will fit into the book. Even if it’s about a minor character that goes out of control. Even if it’s out of order.
Try setting a timer. Work for 45 minutes, then take 15 minutes off to check your email, call a friend, whatever
Identify your best writing time and use it for writing. Don’t sit down to work when you’re mentally and physically exhausted
That said, don’t wait until the perfect time to write. It may never come, and if it does come, it won’t be enough
Posted by CindaChima at 7:44 AM 1 comment:

Wondering how I'm spending my time now that Dragon Heir is in final editing? Am I watching a Lost marathon, scraping sludge from my kitchen floor, or cleaning out my To Be Filed folder?

Oh, no. Get the young ones inside, fill the cistern and bar the doors. I'm writing again.

In a previous post, I mentioned that I'd sold a new 3-book series to Hyperion. Since then, my agents, the wonderful Christopher Schelling, Ralph Vicinanza, and Chris Lotts have sold German, Italian, and Dutch translation rights. So I've been doing the butt-in-chair thing. I'm 300 pages in, and here's a teaser on Book 1.

When 15-year-old Han Alister and his Clan friend Fire Dancer encounter three underage wizards setting fire to the sacred mountain of Hanalea, Han has no idea that this event will precipitate a cascade of disasters that will threaten everything he cares about.
Han takes an amulet from one of the wizards, Micah Bayar, to prevent him from using it against them. Only later does he learn that it has an evil history—it once belonged to the Demon King, the wizard who nearly destroyed the world a millennium ago. And the Bayars will stop at nothing to get it back.
Han’s life is complicated enough. He’s the former streetlord of the Raggers—a street gang in the city of Fellsmarch. His street name, Cuffs, comes from the mysterious silver bracelets he’s worn all his life—cuffs that are impossible to take off.
Now Han’s working odd jobs, helping to support his family, and doing his best to leave his old life behind. Events conspire against him, however. When members of a rival gang start dying, Han naturally gets the blame.
Meanwhile, Princess Raisa ana’Helena has her own battles to fight. As Heir to the throne of the Fells, she’s just spent three years of relative freedom with her father’s family at Demonai Camp—riding, hunting, and working the famous Clan markets. Now court life in Fellsmarch pinches like a pair of too-small shoes.
Wars are raging to the south, and threaten to spread into the high country. After a long period of quiet, the power of the Wizard Council is once again growing. The people of the Fells are starving and close to rebellion. Now more than ever, there’s a need for a strong queen.
But Raisa’s mother Queen Helena is weak and distracted by the handsome Avery Bayar, High Wizard of the Fells. Raisa feels like a cage is closing around her—and an arranged marriage and eroded inheritance is the least of it.
Raisa wants to be more than an ornament in a glittering cage. She aspires to be like Hanalea—the legendary warrior queen who killed the Demon King and saved the world. With the help of her friend, the cadet Amon Byrne, she navigates the treacherous Gray Wolf Court, hoping she can unravel the conspiracy coalescing around her before it’s too late.
Posted by CindaChima at 7:10 PM 4 comments: 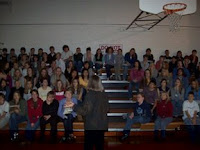 At a recent school visit, a student asked, “If you weren’t an author, what would you do?”

It was the kind of question kids prepare under threat from teachers. I answered without giving it much thought, which is usually how you find a true answer.

“Well, I said, “I would sleep more. I would watch television now and then, and not just the news. I would finish the project I’ve had on my weaving loom for two years and go back to spinning. I would talk on the phone and make pastry and invite people over for dinner. I would cook things that take longer than half an hour.”

The boy blinked at me, and I knew it was TMI, but I continued to unfurl my mental list.

I would continue researching my family tree. I would read more for pleasure and less to a purpose and go back to my other book club. I would get out in the garden and walk in the woods and daydream in the ether and not on the page.

I would buy better Christmas presents and be fully present with my sons when they tell their stories.

I would volunteer more and get involved with a political campaign again.

None of these things are wasting time. But they are the things that go when a person with a family and a full time job becomes a writer.