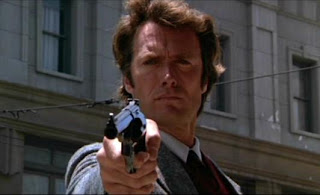 I like to think of blogging as a kind of literary concealed carry.

It’s argued by the gun lobby that concealed weapons protect us all. The street thug and carjacker might think twice knowing his prospective victim might whip out a .44. And because it’s concealed, they don’t know who’s armed.

These days, the world of commerce is a haven for thieves and grifters. Only a fool would attempt to navigate those mean streets without a weapon. Blogging empowers the powerless and—um—franchises the disenfranchised.

Let’s say you’re a health insurance company and you turn down an expensive claim from one of your customers—a claim you know full well is legitimate. Hey, you think. Business is business and I gotta think about my bonus. What’s Granny going to do? Threaten me with her cane? She’ll be dead before this gets through the appeals process.

The next thing you know, search engines are turning up hits on Granny’s Blogspot account of her experience. Links are proliferating. There’s even a new Yahoos Group—MegaMutual Ripoffs.

Granny shows off her incision on Good Morning America. Turns out she has a name—Carolyn—and she’s very telegenic. Other news outlets are calling for a quote. Some busybody Senator is convening a committee and your boss wants to meet with you on Friday afternoon.

Who knew Granny was packing?

Predators of the corporate world—consider yourself warned. Maybe you’re selling electronics gear that you know is defective. Maybe you’re marketing toys covered in lead paint. Maybe you’re an airline that routinely cancels flights and dumps passengers onto the tarmac. Maybe you’re a ripoff vanity publisher that feeds off people’s dreams. Whoever you are, whatever you do—consider this:

Do you feel lucky? Punk?

Posted by CindaChima at 9:00 AM No comments: 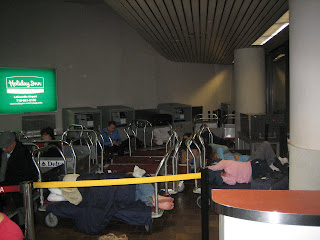 So what is the airlines’ responsibility to the stricken victims of flight delays and cancellations? True, the airlines don’t control the weather. But it doesn’t make sense to have a system so fragile that the slightest perturbation destroys it.
Posted by CindaChima at 3:59 PM 1 comment: 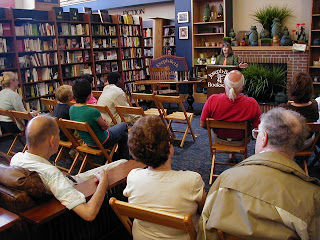 There was just a big debate on a writer’s email list I’m on about author visits. The question was, If I write for children and teens, do I have to do school, bookstore, and library visits?

Some authors love to meet the public, and others don’t. Either way, the potential for humiliation is great. I’ve heard a story about an author who came into a classroom and was asked if she was the substitute teacher. Clearly, the class had not been prepped for her visit!

The travel thing can be grueling and difficult to coordinate with other responsibilities. The hardest thing for me is when I'm being hosted by someone who is embarrassed about a small turnout. They keep apologizing and I'm like, Who can predict these things? I've spoken to groups that consist of the librarian and her sister and others where there are 150 kids (school visit or joint school-library program.)

I’ve had unexpected blessings. I once did a school and library program in this tiny town in southern Ohio. It was so small I had to stay across the river. The town was run by these six powerful sisters-one was a librarian at the county library, one was a librarian at the middle school, one was married to the high school principal, one was the English teacher, the sister in law was the library director. They were the literary and educational aristocracy in that town, and they were powerful. These women pre-sold scads of books, and the entire 6th grade had read my book when I arrived.

I did a writing workshop at a school in San Antonio, and those 6th graders could hardly stay in their seats, they were so excited about writing and sharing what they’d written. And I spoke at a library in Youngstown for Teen Reads Week to a huge crowd of students brought in for the occasion. The library staff made me feel like a celebrity. At a teen book club I spoke to a boy who was so excited about the new fantasy book he’d just read that he wanted to give me his copy so I could read it.

I did a bookstore visit in a nearby small town and a few of my friends showed up and a couple people I didn't even know who saw it in the paper. The store clerk seemed really pleased, so I asked how many people usually show for a booksigning, and she said, "None."

I was a reading nerd when I was a teenager, but I never got to meet an author. I didn’t know where all the authors lived, but I was sure it was nowhere near me. So I do like meeting kids who love books, and who want to write books of their own, because I see my 14-year-old self in every one of them.
Posted by CindaChima at 6:26 PM No comments: